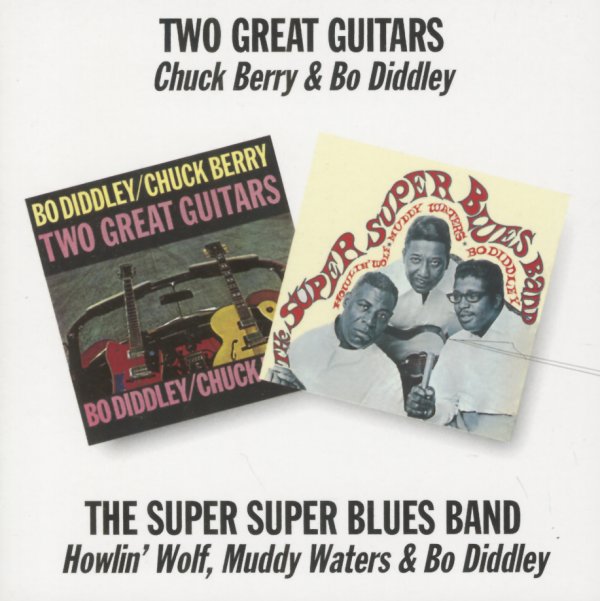 A pair of amazing all-star albums from Chess Records – back to back on a single CD! First up is Two Great Guitars – in which Bo Diddley and Chuck Berry come together in a really unique album for Chess Records in the 60s – and that's saying a lot, given all the groundbreaking sounds we heard from that label at the time! The format is quite unusual – as each side features a long instrumental jam that really lets the guitarists work out their differences – in modes that are almost proto-funk more than blues, rock, or soul – with lots of wicked guitar lines that are way ahead of their time in terms of recording space! The long tracks are "Chuck's Beat" and "Bo's Beat" – but the duo also shine brilliantly on the shorter tunes "Liverpool Drive" and "When The Saints Go Marching In". Next is The Super Super Blues Band – a group that definitely lives up to its name – given that the lineup features the Chess Records stalwarts Bo Diddley, Howlin Wolf, and Muddy Waters! The set's maybe a bit more in the mode of Wolf or Waters than some of Bo's own records – although there's a bit of that riffing spark of his at times – and the tracks are often nice and long, with more than enough room to make you feel like Phil Chess gave these guys plenty of space in the studio to hang out, and find the right way to interact. As much as we love Chess albums with short songs and a soulful punch, we really appreciate it when they can break format and open up on a session like this – which really helps create a unique moment on record! Titles include "Goin Down Slow", "Long Distance Call", "Sweet Little Angel", "Ooh Baby & Wrecking My Love Life", and "Spoonful".  © 1996-2022, Dusty Groove, Inc.