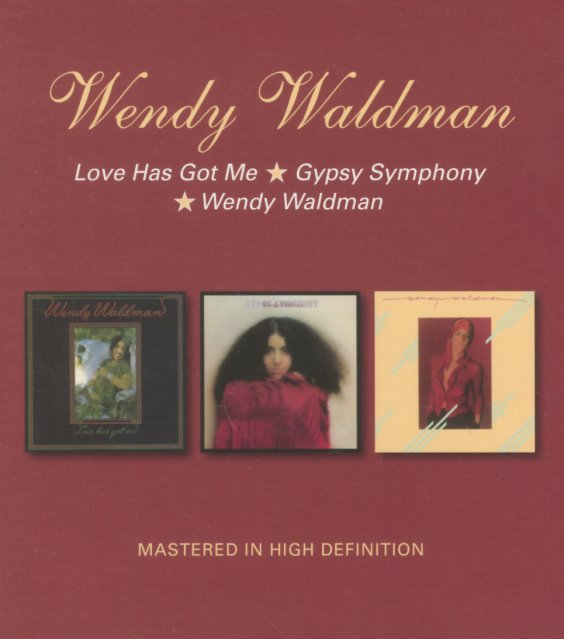 A trio of overlooked gems from Wendy Waldman – brought together in a single set! First up is Love Has Got Me – a hell of a solo start for singer/songwriter Wendy Waldman – a great album that should have had the lady right up there on the charts with some of her best 70s contemporaries, but which sadly never got the attention it deserved! Wendy wrote most of the material here herself, and sings with the confidence of a Laura Nyro or Carole King – but maybe with some of the jazzier inflections that Maria Muldaur or Joni Mitchell were bringing into their work – yet always with an individual spirit that makes it difficult to directly compare Waldman to anyone! Titles include "Train Song", "Gringo En Mexico", "Old Time Love", "Natural Born Fool", "Horse Dream", "Can't Come In", and "Thinking Of You". On Gypsy Symphony, Wendy Waldman's working at the Muscle Shoals studio – a place that really brings out some of the warmth, soul, and jazzy inflections in her vocals – yet all without reducing her music to another Muscle Shoals cliche! Instead, Wendy seems to transform the familiar lineup of players with a voice that's strong, proud, and one of the great overlooked female singer/songwriter talents of the 70s – on titles that include "You Got To Ride", "Studio Song", "Mad Mad Me", "The Road Song", "My Love is All I Know", and "Northwoods Man". The self-titled Wendy Waldman is one of the leanest albums ever recorded by Wendy Waldman – a set with small group backing that only seems to set Wendy's vocals even more free than before! As with her other great work of the time, there's a jazzy current to some of the singing – a mode that resonates with Joni Mitchell or Maria Muldaur – and as before, the songs are strong and proud, really great material that marks Waldman as one of the better songwriters of her generation, maybe right up there with Laura Nyro in spirit and openness – and like Nyro, very much her own woman. Titles include "Racing Boat", "Explain It", "Sundown", "Constant Companion", "Spring Is Here", "Wild Bird", and "Wings".  © 1996-2021, Dusty Groove, Inc.