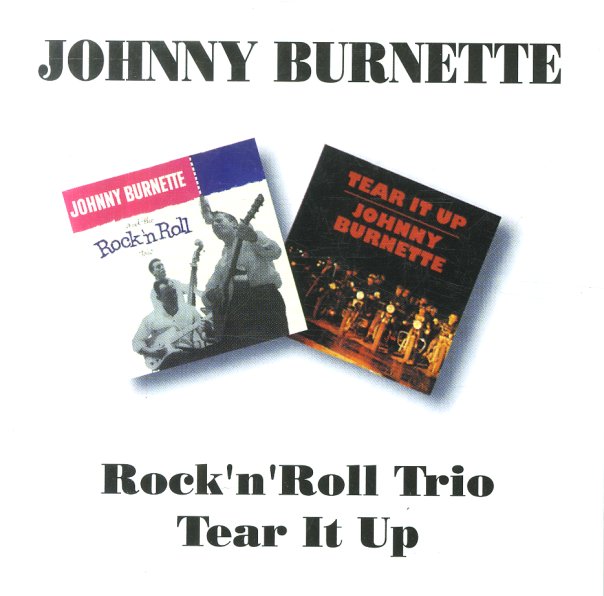 Rock N Roll Trio/Tear It Up

A pair of full length albums from Johnny Burnette – one of the greatest talents in the early years of rock and roll! First up is the seminal Rock & Roll Trio album on Coral from 1956 – a stunning little record and one that's had an undeniable influence on the sound of guitar-based music for generations to come – from rockabilly to garage, psych, and punk – thanks to groundbreaking work from the Johnny Burnette Trio! The album's one of the first really raw records to be cut as a full length rock release – not a handful of previous singles mixed with filler, but a nonstop jammer that has the core trio occasionally augmented by larger horns, but never losing the energy of their sound – or that incredible bite on guitar. The use of fuzz here is landmark – especially on the classic "Train Kept A Rollin" – the group's remake of a Tiny Bradshaw tune, refocused in energy that would later be picked up by The Yardbirds. But the whole thing's great, too – and other titles include "Sweet Love On My Mind", "Lonesome Train", "Honey Hush", "I Just Found Out", "Chains Of Love", "I Love You So", and "Rock Billy Boogie". Tear It Up was a later 90s album that pulled together more obscure moments from the trio – but the quality of the work is rock-solid throughout – as Johnny and Dorsey Burnette play with raw intensity and razor-sharp musicianship. Titles include "Shattered Dreams", "My Love You're A Stranger", "Oh Baby Babe", "Tear It Up", "You're Undecided", "Midnight Train", and "If You Want It Enough".  © 1996-2020, Dusty Groove, Inc.