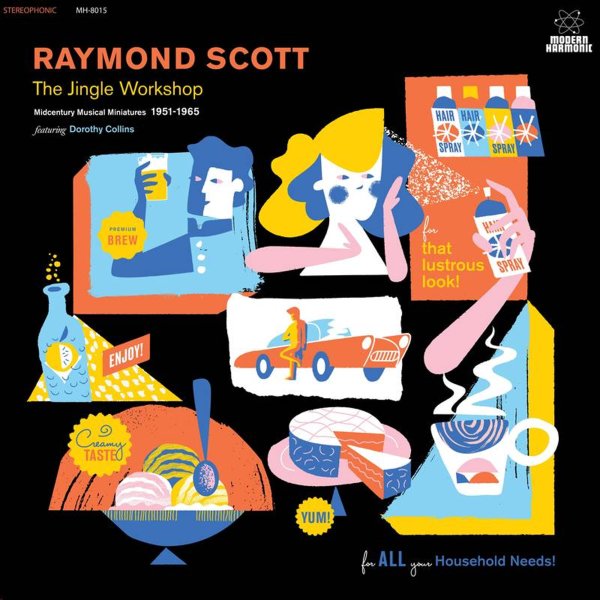 A really cool side of work from the enigmatic Raymond Scott – the legendary midcentury figure who did a wealth of creative work in jazz, soundtrack, and electronic music fields! Turns out, Scott also recorded a heck of a lot of commercials in his studio – all in ways that embrace all the many modes that Raymond did so well – a good number of which also feature lead vocals from his wife Dorothy Collins – a great recording star in her own right! The songs here are all pretty darn short – usually just a minute or less – but the set features a whopping 82 numbers in all, and is a fantastic representation of this lost side of the Raymond Scott legacy – all packaged beautifully with plenty of notes, and sound quality strong enough to move this material way past the demo archive status. Includes ads and jingles for a wide variety of products – from Hamm's Beer, to RCA TV, Gold Medal Flower, Teryton Cigarettes, Krystal Hamburgers, Sprite soda, Revlon Hair Spray, and other big products for the 50s homemaker! Also includes a few rare jingles sung by Mel Torme, too.  © 1996-2021, Dusty Groove, Inc.
(In a hardbound style book!)

Eden Ahbez's Dharmaland
Subliminal Sounds (Sweden), 2021. New Copy
CD...$12.99
A beautiful tribute to the music of Eden Ahbez – the original "nature boy" himself, and a mystical west coast composer who was to the LA scene what Moondog was to New York! The songs here come from unrecorded sheet music left behind by Eden – songs composed in the early 60s, ... CD

Zodiac Cosmic Sounds
Elektra/El (UK), 1967. New Copy
CD...$12.99 16.99
The Zodiac never sounded so spooky – and the album's one of the first in a trend that explored astrology with funky musical backings! The music for the set was put together by moogy maestro Mort Garson – then making a transition from being a straight easy arranger in the early 60s, to ... CD