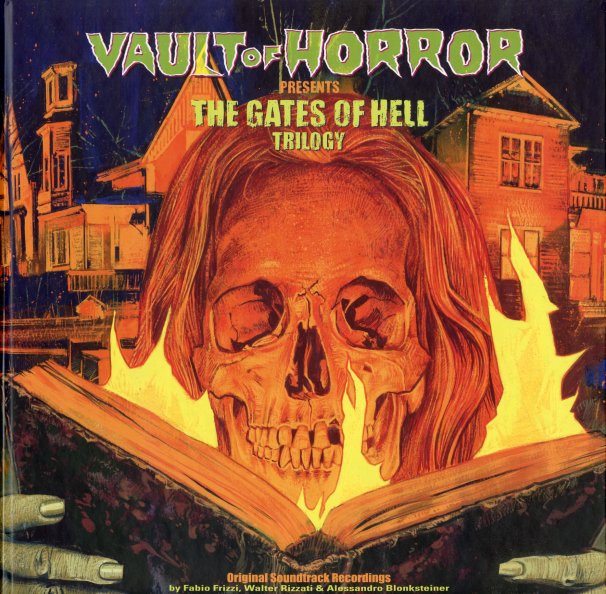 Three Italian horror classics – packaged here in a single set! First up is Fabio Frizzi's score for Nella Citta Dei Morti Viventi/City Of The Living Dead – exactly the kind of set that shows why he was one of the true masters of Italian horror! The sounds here are a mix of electric and acoustic elements – but the latter are often played in offbeat ways that they really sound electric – making for a moody mix of music that goes way beyond the usual spare slasher keyboards! A few numbers use wordless vocals, while others have nicely stepping strings – and a beefier bassline comes into play on a few standout funk tracks as well. Titles include "Toward Dawn", "Fatti Misteriosi", "Apoteosi Del Mistero", "Occhi Di Brace", and "Verso L'Alba". Next is Frizzi's Beyond/E Tu Vivrai Nel Terrore L'Aldila – a very spooky soundtrack – and one that stands out as one of the best-remembered from this important second generation of Italian horror! The record's got less of the atonal orchestrations and funk/thriller modes of a few years before – and moves into the spare, eerie quality that John Carpenter helped usher in – with lots of crashing piano lines, atonal guitar parts, and weird descending chords that feel like they're going to suck you into the deep! There's some very nice and sparing use of synthesizer within the score – just the right bit to add a creepy edge, but maybe not as much as on other synth-heavy soundtracks from the time – and titles include "Voci Dal Nulla", "Oltre La Soglia", "Suono Aperto", "Verso L'Ignoto", and "Giro Di Blues". Walter Rizzati's score for Quella Villa Accanto Al Cimitero/House By The Cemetery has lots of keyboards – in a spare, spooky soundtrack from the early 80s Italian horror scene – a blood-dripping masterpiece from director Lucio Fulcio! Walter Rizzati's music here is heavy on the kinds of electric touches you'd hear from both Goblin or John Carpenter – and often paced at a level that's somewhere between the pair – not as jamming as Goblin, but a bit fuzzier than Carpenter – a blend that makes for some really wonderful numbers that are plenty creepy here on their own – even away from the images on the screen! There's plenty of great bits that creep up on you slowly – and others that jump mercilessly from dark corners – on titles that include "Quella Villa", "I Remember", "Incontro", "Blonk Monster", "Verso Il Terrore", "Voci Dal Terrore", "Tema Bambino", and "Chi Sta Arrivando".  © 1996-2020, Dusty Groove, Inc.
(Heavyweight triple vinyl pressing – on "Nasty" colored vinyl – in a heavy book-style cover!)