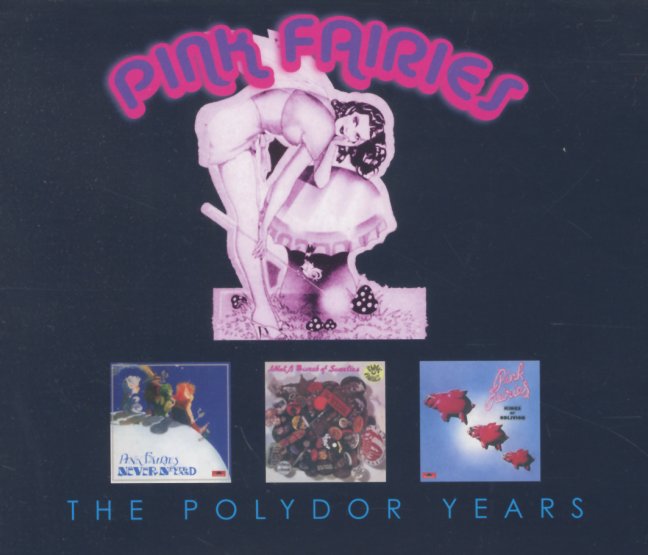 A trio of key albums from the Pink Fairies – served up with lots of bonus tracks too! First up is Never Never Land – the fantastic debut of the Pink Fairies – easily one of the shaggiest, headiest bands on the UK scene at the start of the 70s – and a group who rose from the ashes of the equally important Deviants! The record's an unusual mishmash of modes – a set that confidently swaggers between psych, hard rock, and maybe even a bit of proto-punk – very confident in its approach, and coolly compressed in the production, but never in the slick style that would dominate British rock more strongly in the mid 70s. The Fairies aren't afraid to let their freak flag fly, but they're also clearly moving past hippiedom too – on titles that include "War Girl", "Do It", "Say You Love Me", "Tack One Side Two", "Thor", "Uncle Harry's Last Freakout", and "The Dream Is Just Beginning". What A Bunch Of Sweeties is filled with freaky fuzz from the Pink Fairies – a seminal UK group who were maybe trapped in a space between late psych and early glam – and somehow equally important to both! There's lots going on in the set – modes that are as offbeat as styles put forth by The Fugs in the late 60s, but a lot sharper overall from a musical perspective – especially in the way the group uses great guitar work and a few catchy numbers to sew the whole thing together – on titles that include "Portobello Shuffle", "Marilyn", "Pigs Of Uranus", "Walk Don't Run", "X-Ray", "I Went Up I Went Down", and "I Saw Her Standing There". Kings Of Oblivion is maybe the most fully-formed album from the legendary Pink Fairies – and a set that's got some really searing guitar from Larry Wallis – a melodic genius whose sound really holds things together, and gives the group a stronger focus than ever before! The guitar lines seem to bring out and amplify all the ideas the group were going for before – and maybe give the group a sense of darkness that they never fully reached – not hard rock cliche, but this tightness that's also completely individual – maybe like early Thin Lizzy at their best, yet in a completely different way. Titles include "I Wish I Was A Girl", "City Kids", "When's The Fun Begin", "Chromium Plating", "Street Urchin", and "Chamber Maid". Bonus tracks include "Going Down", "Walk Don't Run (first version)", "War Girl (alt mix)", "The Snake", "Do It (single mix)", "Uncle Harry's Last Freakout (alt mix)", "Well Well Well (alt mix)", "City Kids (alt)", and "Hold On (single)".  © 1996-2021, Dusty Groove, Inc.