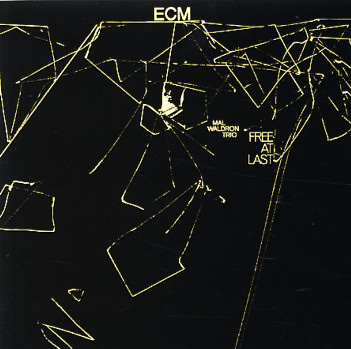 The title's no mistake, as the album was really one of Mal Waldron's first really outside sessions – a real embrace of the free jazz modes coming out of the European scene of the 60s, but in a way that's slightly different than most! As Waldron states in the liner notes, his vision here is free, but not total chaos – an approach to music that's much more unfettered than before, yet still somewhat rhythmically structured – so that the tunes themselves roll out with a great deal of drive and energy, almost modal at points, but a bit fuller overall. The rhythm section here is a great part of the success of the album – with Clarence Becton on drums and the amazing Isla Eckinger on bass – a player whose pulsating approach is a perfect foil for Waldron's bold work on piano. There's actually a surprising amount of groove-driven numbers here – hardly the free jazz of the FMP scene, and more in the mode of some of the most unfettered expressions going down at MPS at the time. Titles include "Rat Now", "Balladina", "1 3 234", "Rock My Soul", and "Boo". Features a full bonus album – with alternate takes of "Balladina", "Boo", and "1 3 234" – and a long take of "Willow Weep For Me".  © 1996-2022, Dusty Groove, Inc.

Contrasts (180 gram pressing)
ECM (Germany), 1979. New Copy
LP...$27.99 30.99
A beautifully avant session from ECM – and a great late 70s showcase for the reed talents of the great Sam Rivers! The album's got a mixture of focus and freedom that makes it one of Sam's best from this period – a group outing that features Rivers on tenor, soprano, and flute – ... LP, Vinyl record album