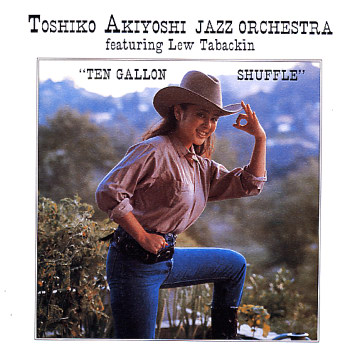 A hokey title and cover, but a great little record – a lesser-known gem from the Toshiko Akioshi big band, recorded in the mid 80s for Japanese release! Toshiko's still working strongly with reedman Lew Tabackin here – and as always, the sound of the reeds really make the record – not only on the bold ensemble passages, but also on the snakey, well-crafted solos that slide out of the fuller arrangements – letting Lew, Frank Wess, and Jim Snidero contribute some really great work on the longer tracks. Titles include "Ten Gallon Shuffle", "Fading Beauty", "Blue Dream", and "Happy Hoofer" – and in case you're wondering, that's a young Monday Michiru on the cover!  © 1996-2021, Dusty Groove, Inc.
(Blu-spec CD 2 pressing!)