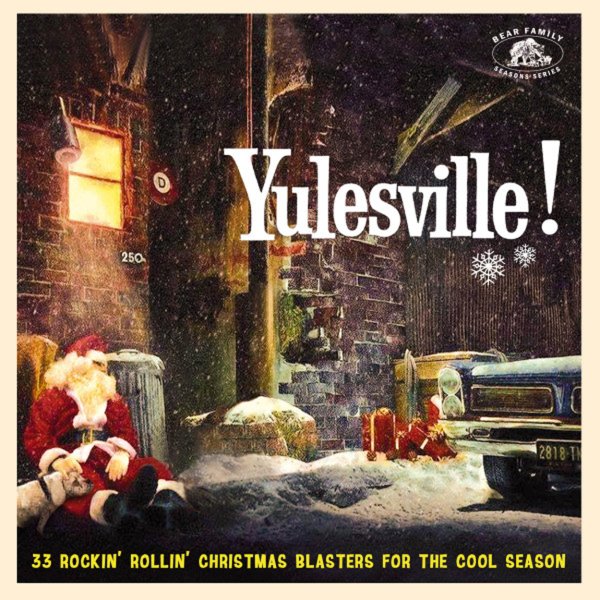 Yulesville is coolsville – especially when it comes in the form of a killer collection of rare Christmas singles from the folks at Bear Family! The package is awash in the kind of groovy, sometimes goofy Holiday singles that broke big in the early years of rock and soul – a nice antidote to the sort of sleepier work that usually graced the record racks in earlier years – and the kind of music that's perfect for sipping egg nog into the wee small hours of Christmas morning! There's plenty of gems here that we've never heard before, and plenty of other great nuggets too – titles that include "Rock & Roll Christmas" by Cordell Jackson, "Wishing Is For Fools" by The Melodeers, "Jingle Jangle" by The Penguins, "Jingle Rock" by Tommy Lee & The Orbits, "Big White Cadillac" by Little Joey Farr, "Xmas Bell Rock" by Barry & The Highlights, "Twisten Bells" by Santo & Johnny, "Sleigh Bell Rock" by Three Aces & A Joker, "Winter Wonderland" by Allen & The Flames, "The Cactus Christmas Tree" by The McGuire Sisters, "It's Christmas Everywhere" by Paul Anka, "All Winter Long" by Linda Laure, and "Christmas Kisses" by The Bookends & Ray Anthony. 33 tracks in all!  © 1996-2022, Dusty Groove, Inc.

Vida E Obra De Johnny McCartney
CBS/Lion, 1971. New Copy
CD...$4.99 14.99
Post-Tropicalia work from Leno – a Brazilian singer who'd worked as part of a duo during the Jovem Guarda years, but who really sounds great here on his own! The style's a bit more straightforward rock than the Brazilian sound of a few years back – a bit fuzzy and compressed at times, ... CD