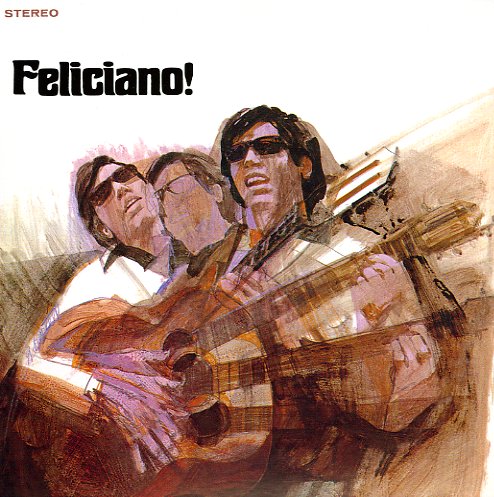 An amazing record! By all rights, this shouldn't be so good – but it's an incredible album of haunting tracks that really has us coming back again and again over the years. The formula is simple: Jose plays late 60s pop tunes on acoustic guitar, and sings them in his spacey soulful voice. Backings are by George Tipton, plus a jazz combo made up of Jim Horn, Ray Brown, and Milt Holland – but it's Jose that really makes the whole thing amazing! His style of presentation is like anything else we can describe – filled with sadness and soul, but enough joy to keep moving forward. He takes tracks like "Light My Fire", "In My Life", "Sunny", and "California Dreamin", and transforms them into an amazing document of the darkness hidden behind the sun of southern California. "California Dreamin" is especially amazing – and Jose's version is one of the best soul songs of all time!  © 1996-2021, Dusty Groove, Inc.
(Out of print, small piece of clear tape covering a slight tear on the booklet cover.)

Imagination (with bonus tracks)
Buddah, 1973. Used
CD...$12.99
A pivotal album for Gladys Knight and group – as the record features their super-huge hit "The Midnight Train To Georgia", a landmark track that not only had a catchy pop hook, but which spoke volumes about African-American migration in the postwar years. The track's one of those ... CD

Do Me Again
Capitol/Orpheus, 1990. Used
CD...$4.99
Freddie Jackson in full effect – stepping out in a set of smooth, mellow, and midtempo numbers – all very much in that 80s male soul sound he helped forge in the first years of his career – still very much in place at the time of this set! The record's not one to rewrite the ... CD

Teddy Pendergrass
Philadelphia International/Legacy, 1977. Used
CD...$4.99
Teddy Pendergrass – we love you! This is one of Mr. P's greatest albums of smooth mellow soul – recorded after he left Harold Melvin & The Blue Notes, and began working in a wonderfully warm solo style that had a huge influence on male vocal soul for years to come! The sound here ... CD