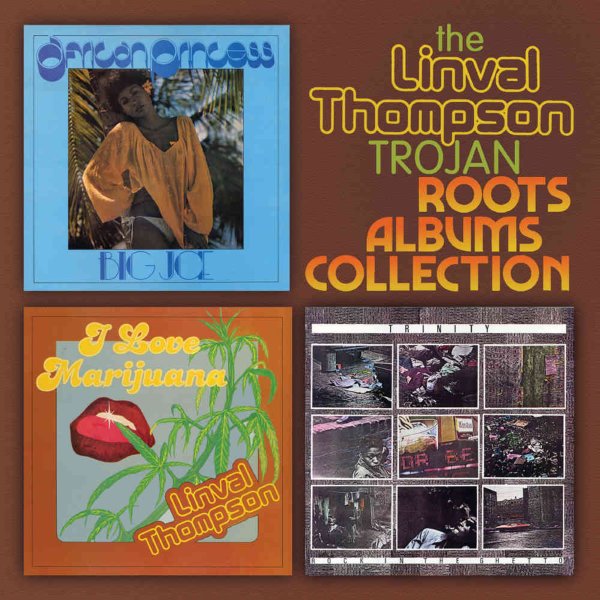 A trio of classic albums produced by Linval Thompson – with lots of bonus tracks too! First up is Linval's I Love Marijuana record – an album with a striking title – and a set that really marked the full promise of Linval Thompson in the 70s – a dubby classic that's every bit as strong on the vocal side of Thompson's skills, as it is the production side! The album was recorded at Tubby's with the Revolutionaries band and an uncredited Junjo Lawes (who would later go on to cut some of the best dub albums ever, with Scientist) – and the vocals have this great style of cresting between sweeter modes and more biting modes – particularly when wrapped around the social themes that always made Thompson stand out. Titles include "I Love Marijuana", "Don't Push Your Brother", "Dread Are the Controller", "The Children of the Ghetto", "Not Follow Fashion", and "Jamaican Colley Version". African Princess is a set that features great DJ vocals from Big Joe – one of the lesser-knowns of the time, but a voice that's perfect for the rich sense of flow that Linval Thompson brings to the production – on titles that include "African Princess", "Big Disgrace", "Tubby At The Controls", "Smoke Marijuana", "Love Can Conquer", and "Pauline Love The Natty". Rock In The Ghetto is classic 70s work from Trinity – a Jamaican deejay singer who gets some excellent help on the set from Linval Thompson! Thompson mixes dubby modes with some sharper, crispier crackles at key moments – working as a nice way of punctuation to the moods delivered by Trinity's vocals – which are almost always in the righteous modes you'd guess from the title. Tracks include "Dangerous Rockers & Ting", "Pope Paul Dead & Gone", "Don't Lose Me", "Life Is Not Easy", "Don't Lose Me", "Every Trick In The Book", "Freedom Style", and "Rock In The Ghetto". 2CD set features 10 bonus tracks – titles that include "Lover's Style" and "Come On Baby Dub Style" by The Roots Radics, "Follow My Heart (12" mix)" and "Pope Paul Dead & Gone (12" mix)" by Trinity, "Mr CID" by Barry Brown, "There's A Song" by Pat Kelly, "King Tubby's Rockers" and "Second Hand Girl" by Scientist & Roots Radics, and "Here With Me" by Linval Thompson.  © 1996-2022, Dusty Groove, Inc.