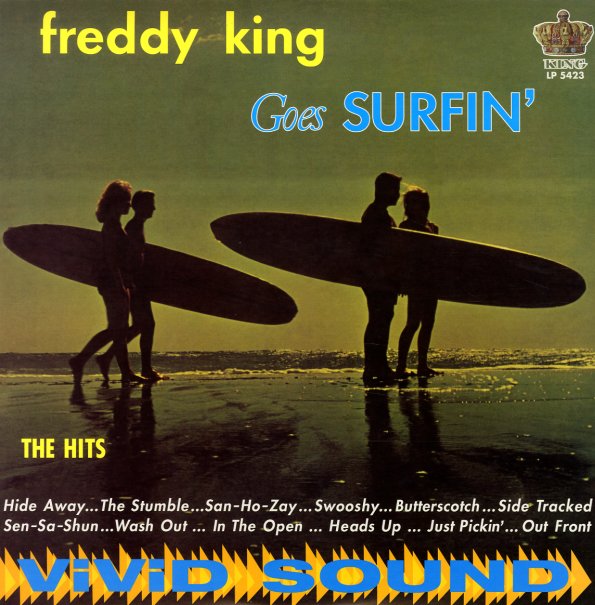 Hardly the surf album you might expect from the title – although the set is a killer batch of guitar instrumentals – with more than enough power to blow any west coast groups right off the beach! At this early point in his career, Freddie King is way more than just a blues guitarist, and his style here was a definite precursor to funk – hard, heavy, and with the kinds of little tricks that would be taken up a lot by other players in the funky 45 era. The recording quality is great, and really brings out the deeper tones in King's instrument – creating a great link between the earlier T Bone Walker generation, and lots of heavy guitarists to come. Tracks are all nice, and titles include "San Ho Zay", "Side Tracked", "Wash Out", "In The Open", "Heads Up", "Just Pickin", and "Swooshy".  © 1996-2020, Dusty Groove, Inc.
(RTI pressed blue vinyl!)

Portraits In Blues (180 gram pressing)
Storyville/Pure Pleasure (UK), 1963. New Copy (reissue)
LP...$9.99 44.99
An overseas recording from Lonnie Johnson – done during that great stretch when his music was being revived by a younger generation of blues listeners who brought him out of retirement! Here, Johnson records in a mode that's very faithful to his classic recordings of the late 30s and early ... LP, Vinyl record album

Standing At The Crossroads (180 gram pressing)
Testament, 1970. New Copy (reissue)
LP...$14.99 44.99
Johnny Shines isn't standing at the crossroads at the same time as Robert Johnson, but he's still sounding pretty darn great here – recording this stripped-down set in Cali in 1970, with just his own guitar alongside his vocals! Shines is maybe best known for his Chicago recordings of the ... LP, Vinyl record album

Blues From The Gutter (180 gram pressing)
Atlantic/Pure Pleasure (UK), Early 60s. New Copy (reissue)
LP...$19.99 44.99
Blues from the gutter, with a nice current of jazz, too – thanks to participation from a hip group who really make this album from Champion Jack something special! Dupree himself sings and plays piano – often with plenty of rootsy currents – but the combo also features excellent ... LP, Vinyl record album