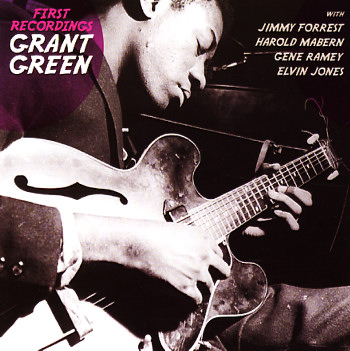 Grant Green's very first sessions in the studio – titles recorded under the leadership of tenor saxophonist Jimmy Forrest, who also hailed from Green's hometown of St Louis! Although Green's discovery is usually credited to Lou Donaldson – who claims to have found Grant in St Louis, and brought him back to New York – these sessions are actually from a few years before the Donaldson discovery, and feature Green already recording in New York under Forrest's leadership, in a combo that also includes Harold Mabern on piano, Gene Ramsey on bass, and Elvin Jones on drums. The material was previously issued on the albums All The Gin Is Gone and Black Forrest – both under Jimmy's name as the leader – but it's brought together here under Green's name, and features the 9 tracks from the dates with him on guitar, plus 6 more that feature the same group without any guitar solos. Titles include "Dog It", "Caravan", "All The Gin Is Gone", "Sunkenfoal", "Laura", "Myra", "You Go To My Head", "Black Forrest", "These Foolish Things", "What's New", and "But Beautiful".  © 1996-2022, Dusty Groove, Inc.

Feelin' The Spirit (non-RVG edition)
Blue Note, 1962. Used
CD...$4.99 (LP...$36.99)
Guitar genius Grant Green is definitely feelin the spirit here – as he mixes his lean 60s style with a host of traditional numbers from the spiritual canon – at a level that provided a whole new sense of soul at the time! There was plenty of music influenced by gospel during the decade ... CD