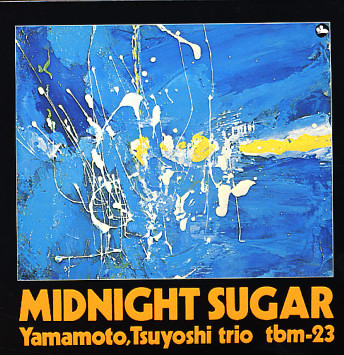 The midnight sugar here comes from pianist Tsuyoshi Yamamoto – who's playing with a soulful, bluesy sort of style – one that reminds us a bit of Ray Bryant back in the 60s, but which also comes across here with a fair bit of lighter, lyrical touches as well! As with other Three Blind Mice albums from the time, the tracks here are all longish and open-ended – recorded with a nice sort of brightness that breaks from other jazz traditions, and moving in surprising ways at each new twist and turn. The group also features the great Isao Fukui on bass and Tetsujiro Obara on drums – and titles include "I'm A Fool To Want You", "Midnight Sugar", "The Nearness Of You", and "Sweet Georgia Blues".  © 1996-2020, Dusty Groove, Inc.
(Part of the Three Blind Mice Supreme Collection!)