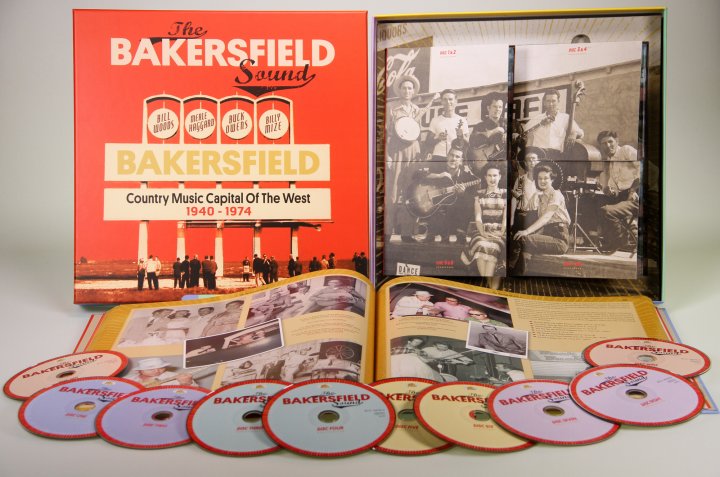 An amazing tribute to the Bakersfield scene – one that finally gives the California city the same sort of attention that we usually see in sets dedicated to Nashville! Bakersfield is well-known as the home of Merle Haggard and Buck Owens, but the city's got a long legacy of influencing country music for decades – a good deal of which is presented here, in a package that brings together loads of rare Cali country singles that we never would have heard otherwise, along with well-chosen cuts from some of its stars, and a fair bit of rare and unissued material too! At the center of the set is a huge hardcover book by Scott Bomar – hardcover, 12" square, and with 224 full color pages of notes and images on the genius of Bakersfield, and what made it such a unique country music spot. The 10 CDs feature nearly 300 songs in all – one disc of which is all rare live and unissued material – and in addition to work by Buck and Merle, the set features tracks by Wayne Morris, Jerry Cornelius, Vancie & Rita, Georgia Lynn, Kenny Hays, Tommy Lewis, Rollie Webber, Johnny Barnette, Bonnie Owens, Bobby Durham, George Latta, Owen Charles, Larry Daniels, Gene Moles, Al Brumley, Bill Handy, Leo Stephens, Faye Hardin, Tom Tall, Cliff Crofford, Kenny Vernon, Rose Lee Maphis, Oscar Whittington, Foyle Holley, Dick Curless, Red Simpson, Gary Paxton, Jim Ward, and many many more!  © 1996-2021, Dusty Groove, Inc.