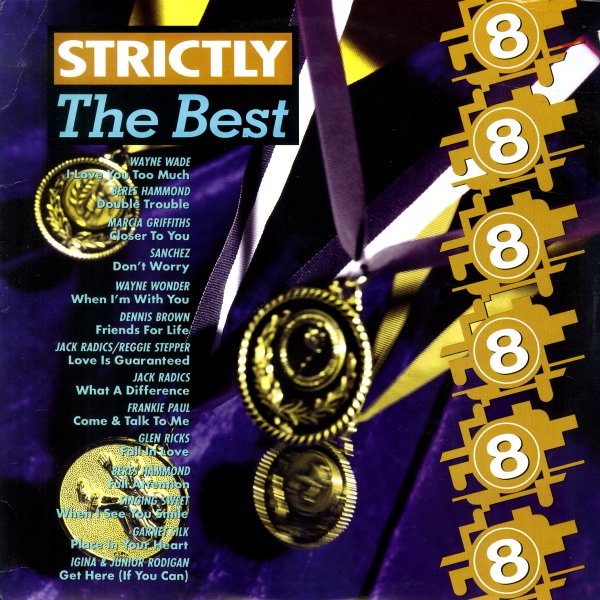 Strictly The Best Vol 4
VP, 1991. Very Good+
LP...$6.99 9.99
Volume 4 in the higly recommenced series of reggae dancehall compilations from VP Records. Like the title says, they include some of the best dancehall singles from 1991, including some hard to find titles. Featuring Beres Hammond, Sanchez, Frankie Paul, Leroy Sibbles, Marcia Griffiths, and more. LP, Vinyl record album

Flesh Of My Skin Blood Of My Blood (with bonus tracks)
Mamba/VP, 1974. Near Mint-
LP...$16.99
One of the crowning achievements of the legendary Keith Hudson – a record that was originally issued on his own tiny label, with very little circulation at the time – but a set that's gone on to become the stuff of legend, thanks to Hudson's revolutionary work in the studio! The record ... LP, Vinyl record album

Legend
Island, 1970s. Very Good Gatefold
LP...$34.99 (LP...$36.99)
One of the best-selling albums ever from Bob Marley – a classic collection of work from his all-too-short career – and one that's gone onto become as famous as Marley's individual records themselves! The collection really allows all the classics to resonate strongly, in a track order ... LP, Vinyl record album

Survival
Island, 1979. Very Good+
LP...$29.99
One of the sharpest, most righteous albums from Bob Marley – in case you couldn't guess from the title, which is his response to a recent assassination attempt! The whole thing's got a very classic vibe – and the lyrics have even more of a political current than some of Marley's other ... LP, Vinyl record album

Bob Marley & The Wailers – Live
Island, 1975. Near Mint-
LP...$19.99 (CD...$3.99, CD...$3.99)
A great global showcase for the growing power of Bob Marley – an excellent live set recorded in London in 1975, and a date that shows Bob and The Wailers working with the crowd in this really universal spirit! The group's almost got a funkier current here than on some of their studio record ... LP, Vinyl record album

Bush Doctor (Rolling Stones)
Rolling Stones, 1978. Very Good
LP...$9.99
A big crossover moment for Peter Tosh – a set that was issued on the Rolling Stones own label, with a bit of help from Keith and Mick themselves! But if that makes you worry about some clunky effort that tries to blend rock and reggae, you can put all your fears aside – as the set's ... LP, Vinyl record album