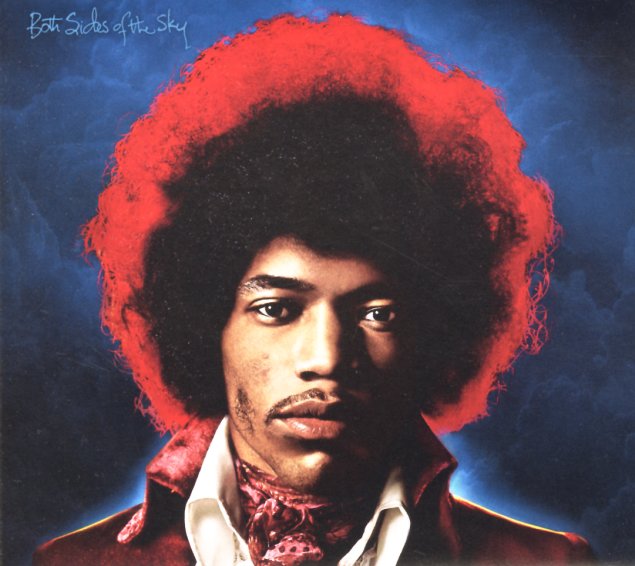 Both Sides Of The Sky

Mindblowing lost work from Jimi Hendrix – studio tracks from the late 60s that were never issued at the time, brought together to make a completely sublime full length set! The package is way hipper and stronger than you might imagine – not studio snippets or replayed outtakes – but instead some strong full longs, and rare studio recordings of material that Jimi had mostly given the world in a live setting – all recorded between 1968 and 1970, and almost all issued here for the first time ever! The core group on most tracks is the trio with Buddy Miles on drums and Billy Cox on bass – but the tracks also feature some surprising guests – including a bit of organ and vocals from Stephen Stills, tenor from Lonnie Youngblood, and guitar from Johnny Winter. One tracks features Jimi just duetting with Miles on drums – and there's another that even features Hendrix on vibes. Titles include "Sweet Angel", "$20 Fine", "Power Of Soul", "Jungle", "Cherokee Mist", "Send My Love To Linda", "Woodstock", "Mannish Boy", "Lover Man", "Hear My Train A Comin", "Georgia Blues", "Stepping Stone", and "Things I Used To Do".  © 1996-2022, Dusty Groove, Inc.
(Recent reissue on 180 gram purple vinyl! Includes booklet.)

Jimi Hendrix Experience – Smash Hits
Reprise, Late 60s. Very Good+
LP...$14.99
One of those "greatest hits" of Greatest Hits collections – as Smash Hits has come to be regarded by many as a key entry in the cannon of classic rock – thanks to tremendous work from Jimi, bassist Noel Redding, and drummer Mitch Mitchell! Every track here is a gem – ... LP, Vinyl record album

Hooker 'N Heat
Liberty, 1970. Very Good+ 2LP Gatefold
LP...$29.99
If you ever doubted the blues chops of Canned Heat, take a listen to this album – as the group are joined by the great John Lee Hooker, who they let stand strongly in the spotlight and almost make the album his own! Previous sets by Canned Heat were already pretty darn great – a huge ... LP, Vinyl record album

Woodstock (3LP set)
Cotillion, 1970. Very Good+ 3LP Trifold
LP...$29.99
A seminal album from the end of the 60s – the triple-length soundtrack to the legendary Woodstock Festival in 1969 – pulled from all the many hours of material recorded for the film of the event! The set list reads not just like a "who's who" of hipness at the time – ... LP, Vinyl record album