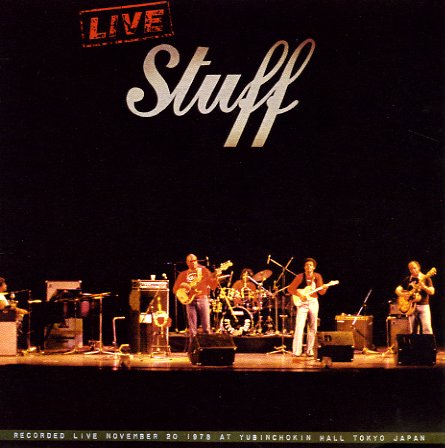 A nice little live set from Stuff – one that's recorded in Tokyo, with a groove that's a bit more open than their better-known New York live album from a few years later! The sound's somewhat rougher than the Stuff studio sessions, but in a good way – one that shows that the combo can really jam nicely, in a blend of funky rhythms, jazzy riffing, and a few soul-inspired moments. There's also a surprising Motown element to the music too – heard in the group's "Junior Walker Medley" – which fuses "Road Runner" and "Pucker Up Buttercup" – and in their long take on "Signed Sealed Delivered I'm Yours" – although both these tunes are quite far from Motown in their overall execution. Players include Cornell Dupree and Eric Gale on guitars, Richard Tee on keyboards, and Steve Gadd on drums – and other cuts include "Foots", "Need Somebody", and "Love Of Mine".  © 1996-2021, Dusty Groove, Inc.

Comin' At Ya!
Mercury (Japan), 1976. New Copy (reissue)
LP...$39.99 (CD...$13.99)
Pure brilliance from Coke Escovedo – an artist who really finds a way to make so many different things come together perfectly – with results that are even stronger than his previous work in Azteca and Santana! The set's got a warm blend of Latin roots, modern soul, and jazzy fusion ... LP, Vinyl record album