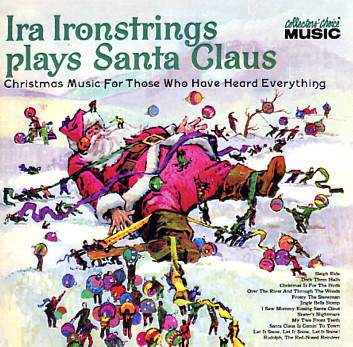 One of the greatest instrumental Christmas albums of all time – a non-stop swinging affair from the legendary Alvino Rey – recorded under his Ira Ironstrings tag while under contract to Capitol under his real name! The style here is a weird mix of the swinging bachelor pad styles you'd know from Rey's Capitol albums, and a bit more of a jazz-based touch – often with a few bits of trad instrumentation thrown in, but not in the usual dixie-based way. There's plenty of playful moments throughout – odd sounds, unusual use of common instruments, and a all-out sense of whimsy that really lives up to the joy of the season – and which completely transforms tunes like "Let It Snow", "Sleigh Ride", "Frosty The Snowman", and "I Saw Mommy Kissing Santa Claus" – as well as original tunes like "Skater's Nightmare", "Jingle Bells Stomp", and "Christmas Is For The Birds".  © 1996-2021, Dusty Groove, Inc.
(Mono pressing with deep groove. Cover has a small split on the center of the spine.)

Now Sound Of The Brass Ring
Dunhill, 1967. Very Good+
LP...$14.99
A killer little record – and the album that gave us the name for our Now Sound section! No surprise, though, given how cool the music on this one sounds – lean, mean, 60s instrumentals – way different than the sleepier easy of the early part of the decade – and done with a ... LP, Vinyl record album