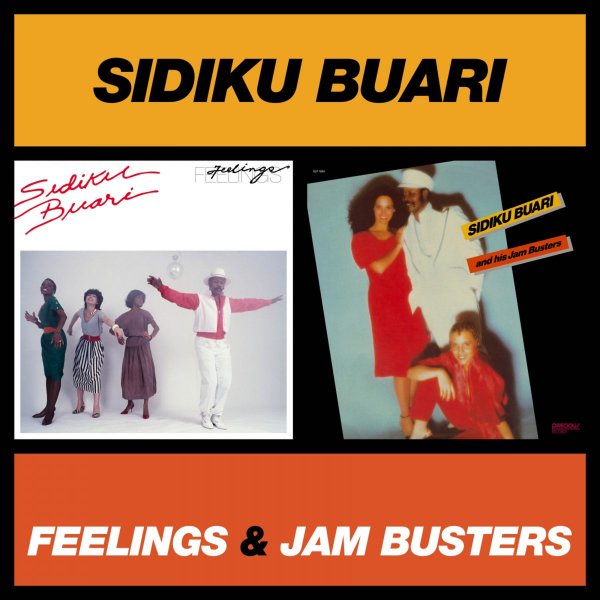 A pair of rare records by Sidiku Buari – issued back to back on a single CD! Feelings is a record that was issued on the tiny Precious label – home to only two Buari albums in its tiny catalog – and the set follows strongly on the work that Sidiku recorded in New York during the 70s, records that were initially issued just under his last name! The groove on some tracks is full of early 80s NYC touches – sweet electro keyboards that provide some great middle-ground shocks to the tunes – while beats crackle crispy at the bottom, and Buari sings these slinky soul vocals that are a lot more American than you'd guess from the Ghanaian recording of the album. But other numbers have more of a West Africa vibe – that updating of older modes that was taking place in Nigeria too. Titles include "Music", "Feelings", "Anowar", and "Yayo Papa". Sidiku Buari & His Jam Busters has a groove that definitely lives up to its name – a sweet 80s crackle with lots of tunes that jam in an old school funk style – keyboards, basslines, and rhythms right on the money – in a great Transatlantic bridge between Ghana and New York City! The set begins with the super-funky "Let's Go To Funky Town" – a tune with a break on the intro to rival some of the best funky club work of the time – and the vibe continues strongly through the rest of the set, on titles that include "Sophisticated Jammer", "Power To My People", "Rhythm Of Africa", "Minsumobo", and "Karambani".  © 1996-2021, Dusty Groove, Inc.

Too Tough/I'm Not Going To Let You
Sum Sum/BBE (UK), Early 80s. New Copy 2LP
LP...$26.99 29.99
Wonderfully groovy work from Rim Kwaku Obeng – an artist with African roots, but working here in the San Francisco scene of the early 80s – where he's clearly picked up a very international vibe in his music! Rim definitely plays some traditional percussion on the tracks, but there's ... LP, Vinyl record album

Ernest Chahoud Presents Taitu – Soul Fueled Stompers From 1960s/1970s Ethiopia (3LP set)
BBE (UK), Late 60s/Early 70s. New Copy 3LP Gatefold
LP...$32.99 36.99 (CD...$9.99)
A fantastic collection of Ethiopian funk – rare singles from the late 60s and early 70s – all brought together as an amazing illustration of a time when the scene was really on fire! The music here has this incredible resonance between ancient and modern – local and global – ... LP, Vinyl record album