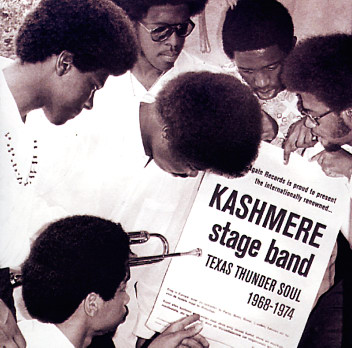 A massive exploration of the music of Kashmere Stage Band – the legendary Texas funk combo whose work barely got any circulation at the time – but who've become minor stars, thanks to the efforts of Stones Throw and Wax Poetics! The set goes even deeper than any of the previous vinyl reissues of work by the group – and features some previously unreleased tracks, and alternate takes on their funkiest numbers! The Kashmere groove is incredible – blasting horns, scratchy guitars, and funky drums – all wrapped super-tight around a range of original material and some more familiar numbers – all recast here in super-heavy funk mode! Titles include "All Praises", "Thank You", "Scorpio (extended)", "Headwiggle", "Do You Dig It Man", "Getting It Out Of My System", "Zero Point (parts 1 & 2)", "Boss City", "Burning Spear", "Take Five", and "Keep Doing It".  © 1996-2022, Dusty Groove, Inc.
(Includes download!)