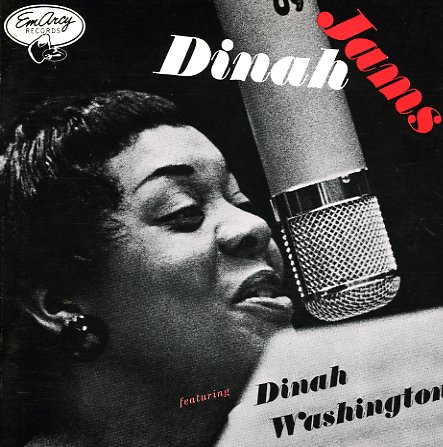 One of the best jazz-based sessions recorded by Dinah Washington in the 50s – appropriately titled Dinah Jams, which is a pretty good reference to the feeling of the set! The sessions were recorded in a relatively relaxed, intimate feel – not necessarily as unbridled as a true jam session might be, but with a lot more interplay between the instrumentalists in the group than you might get on a typical 50s jazz session. And with horn players that include Cliford Brown, Harold Land, and Herb Geller – alongside rhythm by Junior Mance, Richie Powell, and Max Roach – you'd have to expect that there'd be some good interplay on the set! Titles include "I've Got You Under My Skin", "No More", "Darn That Dream", "You Go To My Head", and a nice open-ended version of "I'll Remember April"!  © 1996-2020, Dusty Groove, Inc.
(Out of print 24-bit remaster, includes obi.)

Dinah '63
Roulette, 1963. Used
CD...$2.99
Dinah follows up her Dinah 62 set with an equally well-done set of tracks for 1963! The album's got that great, late Dinah Washington sound – that boozy style with heavy arrangements that she used often at Roulette, and which really seemed to help ease her vocals into a more modern setting. ... CD

I Wanna Be Loved
Mercury, 1962. Used
CD...$8.99
A key set in the early 60s recasting of Dinah Washington's sound for a younger generation – and a record that pairs Dinah's great vocals with some lively arrangements from Quincy Jones! The Q really knows how to hip things up for the record – taking the familiar tunes of the themes and ... CD

Back To The Blues (with bonus tracks)
Roulette, 1962. Used
CD...$5.99
A bit different than some of Dinah Washington's other 60s work for Roulette – a set that's not entirely back to the blues promised in the title, but one that's definitely got a strong bluesy undercurrent! The backing's, by Fred Norman, aren't nearly as lush as on other Roulette sessions ... CD

For You, For Me, For Evermore
EmArcy, 1956. Used
CD...$6.99
Produced by Bob Shad and arranged by Richard Hayman. Features Hank Jones on piano and Al Ciaola on guitar. Titles include "For You For Me For Evermore", "In The Wee Small Hours", "I'll String Along With You", "Delovely", and "Down In The Depths". CD