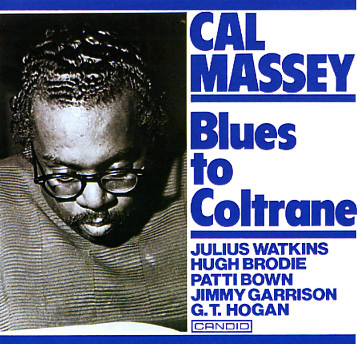 The only session as a leader from trumpeter Cal Massey – a big influence on soulful modernism in the 60s, but an artist who showed up more in the liner notes for records than he did in the studio! The record's a really unique one – and a set that crackles with the best sort of intensity of the Candid jazz label at the time. Massey's vision here is one that's extremely progressive – open in a hardbop sort of way, but often touched with more of the modernism that was showing up in the darker corners of the Blue Note scene. His trumpet work here has a mix of sweetness and sharp edges that reminds us a lot of Johnny Coles at his best – but almost even more important is his writing and overall conception – as the tunes here are a fantastic mix of high concept ideals that never fail to groove – of a sort that would show up later in the 60s on records by Hank Mobley, Lee Morgan, and others. The group here is a sextet – with Massey on trumpet, Julius Watkins on French Horn, Hugh Brodie on tenor, Patti Brown on piano, Jimmy Garrison on bass, and GT Hogan on drums – and titles include "These Are Soulful Days", which was recorded by Lee Morgan, and "Bakai", which was recorded by Coltrane – and the tracks "Blues To Coltrane", "What's Wrong", and "Father & Son".  © 1996-2022, Dusty Groove, Inc.
(Limited edition!)

Music From The Source (180 gram pressing)
Enja/Pure Pleasure (UK), 1977. New Copy (reissue)
LP...$39.99 44.99
One of the few albums issued as a leader by bassist Cecil McBee – and like all of the rest, a really amazing record that showcases the visionary talent that often made McBee such a key part of other folks' groups! The tracks are long and spiritual, but with slight avant leanings – and ... LP, Vinyl record album

Kabsha (180 gram pressing)
Theresa/Pure Pleasure (UK), 1980. New Copy (reissue)
LP...$39.99 44.99
Fantastic work from the legendary Idris Muhammad – the funky drummer who first rose to fame making breakbeats with Lou Donaldson in the 60s, then recorded some hip soul-based records in the 70s – here really getting back to basics with a set of soulful, spiritual small combo jazz! The ... LP, Vinyl record album

Retribution, Reparation (180 gram pressing)
Nimbus/Pure Pleasure (UK), Early 80s. New Copy (reissue)
LP...$39.99 44.99 (CD...$9.99)
A legendary album from the LA jazz underground of the 80s – one of a rare few sets recorded as a leader by the great pianist Nate Morgan! Morgan's something of a lost talent, but was a key part of the scene that was forming around Nimbus Records at the time – a great musician who has ... LP, Vinyl record album