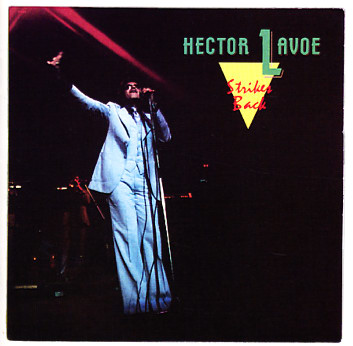 A real salsa bright spot in the mid 80s – a record that takes Hector Lavoe back to the best sounds of his albums of the 70s, thanks to tight production from Willie Colon! Despite a gimmicky title, the record really keeps things simple – and sets Lavoe's vocals up with a small combo of twin trombones, percussion, and keyboards – grooving mostly in the mode that Colon first put forth years back, and which still is really the best showcase for Hector's talents. Arrangements are by Marty Sheller, Louie Cruz, Louie Ramirez, and others – and titles include "Taxi", "Loco", "Ponce", "En El Fiando", "Escarchas", "Plato De Segunda Mesa", and "Ella Mintio".  © 1996-2021, Dusty Groove, Inc.
(Sunrise label pressing. Cover has light wear.)

African Fire
Top Hits, 1978. Very Good+
LP...$24.99
Nothing too African about this set, but the record's a sweet 70s salsa cooker from percussionist Elio Pacheco – a record that's got plenty of warm touches in the production, but a pretty upbeat groove overall! There's vocals on most tracks – sung by Freddy Bogado and Luis Rivas – ... LP, Vinyl record album

Irakere (1981)
Areito (Cuba), 1981. Very Good+
LP...$24.99
Killer 70s work from this legendary Cuban group! The record's better than most of their output outside of Cuba, and it features a stunning mix of Latin grooves and electric funky elements, in a manner that's very similar to some of the NuYorican groups in America during the time. The great Chucho ... LP, Vinyl record album