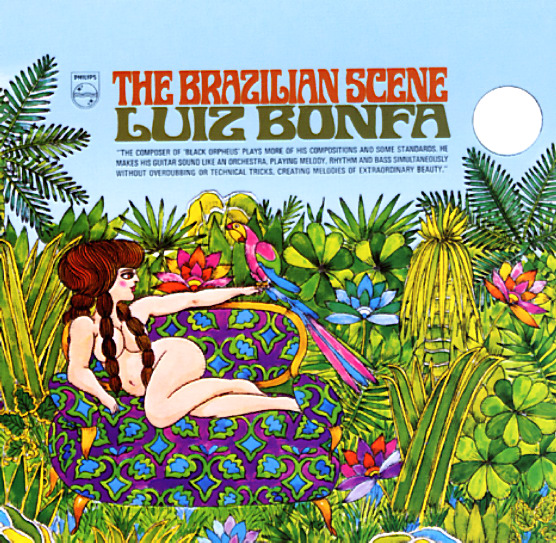 A great little session from Luiz Bonfa – one that features a hip core combo mixed with slightly larger backings – all in a groove that really stands out from other mainstream bossa albums of the 60s! Bonfa's acoustic guitar is set up here with Jerome Richardson on flute, Don Payne on bass, and Helcio Milito on drums – all working in a sound that's lightly touched with occasional bits of strings or woodwinds from Hal Mooney – never too much to over-sweeten the music, and often in ways that underscore the bluer, sadder tones in the music. Bonfa contributed to me great original tunes to the record that really stand out – numbers that include "Avocado", "Moonlight In Rio", "Embolada", "Her Face", "Dream Girl", "Sambalero", and "Zomba" – all of which make the record stand out from other familiar bossa tunes of the time.  © 1996-2022, Dusty Groove, Inc.
(Black label stereo pressing with deep groove. Cover has a tiny bit of marker notes on back, but is otherwise great!)

Black Orpheus Impressions
Dot, Late 60s. Near Mint-
LP...$19.99
A groovy blend of bossa themes and some of the lighter pop treatments that Bonfa often received – not really a problem for us, as the approach always filled out his sound a bit more, and made for some catchy tunes with a very groovy style! Tracks include "Bahia Soul", "Dois ... LP, Vinyl record album

Luiz Bonfa
Dot, Mid 60s. Near Mint-
LP...$19.99
A pretty great little album from Bonfa – always one of the more corruptible bossa players, working here in a groovy set of pop arrangements by Deodato with a lively American twist! Some tunes are fast-driving bossa numbers with good jazz accompaniment, others have backing vocals in a ... LP, Vinyl record album

III Festival Internacional Da Cancao Popular Rio Vol 2
Philips (Brazil), 1968. Very Good-
LP...$29.99
A groundbreaking moment in Brazilian pop culture! The 3rd International Festival of Song in Rio was fraught with controversy – Brazilian music was at a crossroads, and the new experiments of some of the younger groups didn't really sit well with the more conservative audiences in the country ... LP, Vinyl record album

E De Lei (aka Images On Guitar)
Philips (Brazil), 1972. Very Good+
LP...$29.99
One of Baden Powell's grooviest albums ever – a brilliant blend of his bossa roots with the freer 70s grooves of MPS! The album follows the mode of some of his other European recordings, but is still a bit different – in that the overall sound is a bit freer than before, with tracks ... LP, Vinyl record album

Tempo Presente
Philips (Brazil), 1980. Very Good+
LP...$48.99 (CD...$14.99)
Wonderfully warm electric work from Edu Lobo – a sublime late 70s set that we'd stack right up there with our favorite albums of the time by artists like Joyce, Marcos Valle, or Joao Donato! As with all three of those artists, Edu uses some 70s electric elements to really transform his sound ... LP, Vinyl record album

Minha Hora E Vez
Philips (Brazil), 1976. Very Good
LP...$11.99
Sweet 70s samba from Jair Rodrigues – nothing fancy, but a very solid album all the way through. Production is full, but never too much to smother the tunes – and a number of tracks feature chorus vocals alongside Jair's lead. Titles include "Um Filho Meu", "Minha ... LP, Vinyl record album