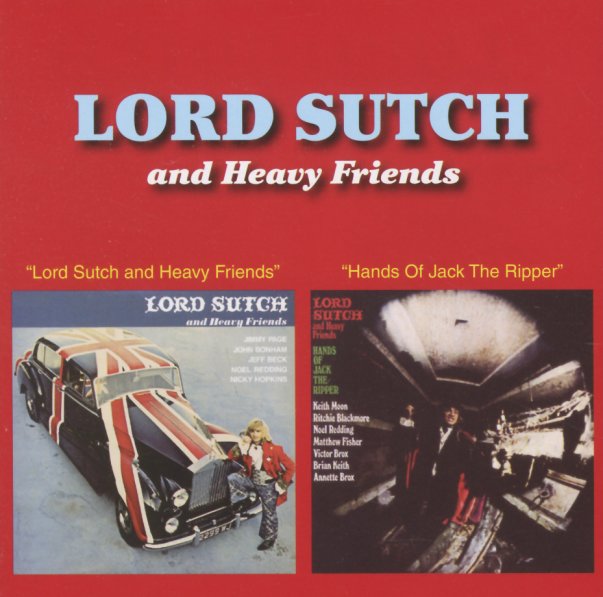 Two Cotillion classics from Screaming Lord Sutch – back to back on a single CD! First up is Lord Sutch & Heavy Friends – an album that's almost equally well-known for its work by a host of famous guests – including Jeff Beck, Jimmy Page, John Bonham, and others! Page is perhaps the most involved here – as he produced the set with Sutch, co-wrote some tracks, and plays some mighty searing guitar – as does Beck, which makes the album almost worth it alone for all the wonderful solos! But Sutch himself is pretty great too – kind of a mish-mash of late 60s nasty camp references, with the same sinister vibe as Kim Fowley – and an equally freewheeling approach to a tune that makes the album a heck of a lot of fun. Titles include "Gutty Guitar", "Flashing Lights", "Wailing Sounds", "Thumping Beat", "Union Jack Car", and "London". Hands Of Jack The Ripper is filled with weird and wild sounds from Screaming Lord Sutch – and a set that has as many "heavy friends" at play as his better-known previous album for Cotillion! As with that set, the vibe here is an odd mix of older beat group styles from mid 60s London, but filtered through a generation that's already bursting out with hard rock, psych, and prog inspiration – which means any nod towards older rock and soul roots come out sounding very offbeat in the end! Players include Ritchie Blackmore on lead guitar, Keith Moon on drums, and Noel Redding on bass – and titles include "Country Club", "Great Balls Of Fire", "Bye Bye Johnny/Johnny B Goode", "Gotta Keep A Rocking", and "Hands Of Jack The Ripper", which is mini-horror movie itself!  © 1996-2021, Dusty Groove, Inc.