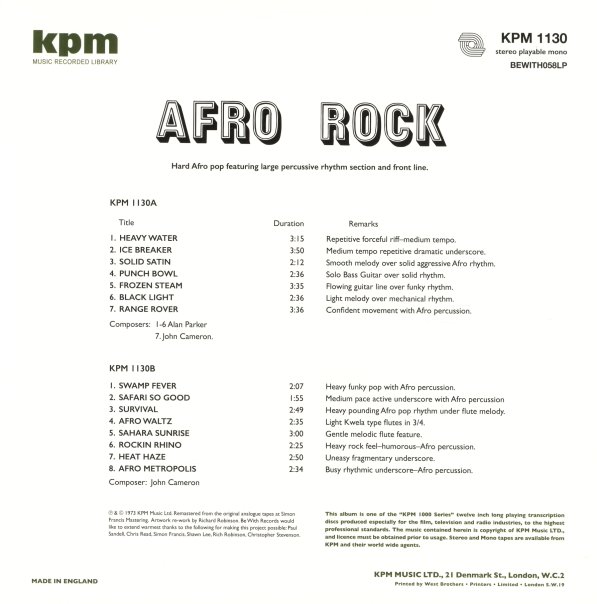 African rhythms, jazzy instrumentation, rock inspiration, and a motherlode of funky sound library grooves from two of the best British maestros working in the business! The album's an early 70s gem from the KPM catalog – one of the most sought-after records ever issued by the label – and like the rest, never really made for public sale back at the time! Despite that humble origin, though, the grooves here are right up there with the funkiest work coming out from that side of the Atlantic at the time – a brilliant post-colonial blend of acoustic percussion, electric keyboards, and a fair bit of fuzzy guitar – all presented with a stripped-down, no-nonsense approach to the rhythms that's often funkier than work by some of the bigger names in the genre. Titles include "Heavy Water", "Ice Breaker", "Solid Satin", "Punch Bowl", "Frozen Steam", and "Black Light" by Alan Parker – and "Swamp Fever", "Range Rover", "Survival", "Afro Waltz", "Heat Haze", "Rocking Rhino", and "Afro Metropolis" by John Cameron.  © 1996-2021, Dusty Groove, Inc.