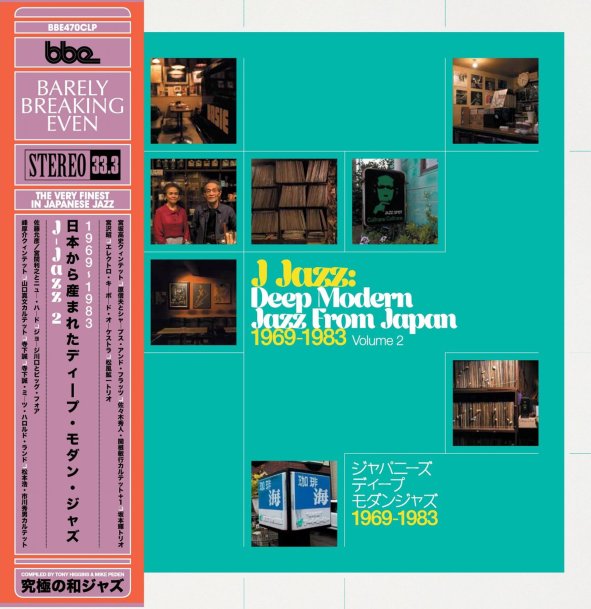 Also available
Various — J Jazz 2 – Deep Modern Jazz From Japan 1969 to 1983 (3LP set) ... LP 39.99
An incredible trip through the 70s Japanese jazz scene – a second volume of J Jazz that's even bigger and better than the first – with unknown gems from private presses, indie labels, and rarities from the Japanese branches of the major labels, too! Compilers Tony Higgins & Mike Peden (who are both also responsible for the nicely done notes) follow through on all of the things we loved about the first J Jazz compilation, but improve on it by going bigger and digging deeper. The majority of the tracks were recorded from 1969 through the late 70s – with a few recorded in later years – and all have a wonderful way of being open to the stylistic inventions of the time without getting hung up on trends. So while there's some fusiony funk and electric piano, there's plenty of acoustic instrumentation and timelessly inventive material. BBE has outdone themselves on this excellent collection – and titles include "Dragon Dance" by Makoto Terashita & Harold Land, "Daguri" by Kohsuke Mine Quintet, "Distant Thunder" by Mabumi Yamguchi Quartet, "Animal Garden" by Miyasaka + 5, "Mother Of The Future" by Electro Keyboard Orchestra, "Serenade To A Dimly Lit Street" by Hiroshi Matsumoto/Hideo Ichikawa Quartet, "Teru-Teru Bozu" (Black Keys) by Teru Sakamoto Trio, "Little Giant" by Nobuo & Sharps & Flats, "Brown Trout" by Akira Miyazawa and more – plus the CD bonus track "Original Bill" by Koichi Matsukaze Trio. 15 tracks on 2CDs.  © 1996-2022, Dusty Groove, Inc.