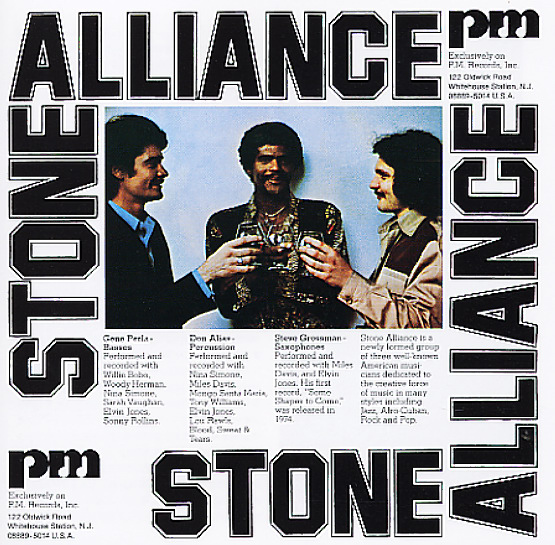 An amazing little group – and one of the real standouts in indie jazz during the 70s! Stone Alliance are a killer power trio made up of players who'd previously worked for Elvin Jones – and all three of them have inherited a frenzied sense of rhythm from Jones – and that great sharp edge he brought to his initial early recordings in the post-Coltrane years! But there's also a deeper sound going on here, too – a bit of funk, and definitely a bit of Latin in the percussion and basslines – which makes for these grooves that are as complicated as they are infectious – often given some sweet spiritual tones from the reeds on top! The lineup features Steve Grossman on tenor and soprano sax, Gene Perla on bass, and Don Alias on drums and percussion – all working together with tremendous energy, but a great focus too – always soulful, and never too jamming at all. Titles include the insane break track "Sweetie Pie", plus Stevie Wonder's "Creepin", "Duet", "King Tut", "Samba De Negro" and "Vaya Mulatto".  © 1996-2021, Dusty Groove, Inc.
(Part of the Modern Jazz Connection series!)

Album Of The Year
Timeless/Solid (Japan), 1981. New Copy
CD...$13.99
Well, "album of the year" might be a hard claim to live up to – but this is a heck of a great record! The album's one of Blakey's real sleepers – cut years away from his time at Blue Note, with a fluid soulful approach that steps off his work at Prestige quite nicely. The ... CD

Vim & Vigor
Timeless/Solid (Japan), 1983. New Copy
CD...$13.99 (LP...$13.99)
An album with a terrible cover – but a wonderful sound! Underneath this ridiculous bikini-clad cover lies some of the best work that Louis Hayes and Joe Farrell cut during the 80s – a freewheeling and open session that's steep on soul, and filled with the best energy both players could ... CD