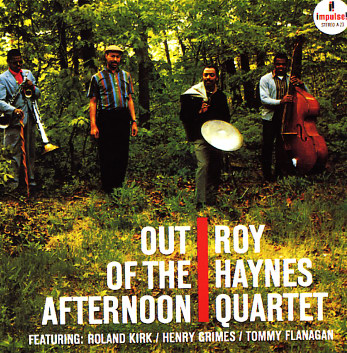 Drummer Roy Haynes always brings something great to the table for any album he does as a leader – and this record is no exception! Here, the "added something" is the presence of Roland Kirk on reeds – offered a key early chance to express his most modern ideas in the freedom of Haynes' group – working alongside Tommy Flanagan on piano and Henry Grimes on bass, in what was easily one of the hippest groups to record for Impulse in the early 60s! The record's filled with wonderful material – and a mix of originals and standards done with a very twisted edge – all with great interplay between Kirk's quirky sax work and Roy Haynes' amazing drumming – often changing up timings and rhythms with ease, and really matching Kirk's quirky energy for the set. Titles include "Moon Ray", "Raoul", "Snap Crackle", and "Long Wharf".  © 1996-2021, Dusty Groove, Inc.