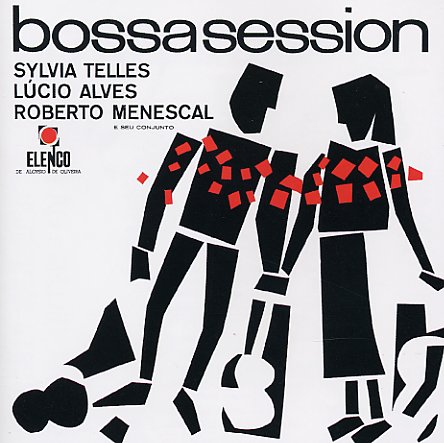 A classic early bossa session on the Elenco label! Sylvia Telles and Lucio Alves sing, both solo and in duets, while Roberto Menescal backs them up with his tight little combo – and even plays vibes on a few instrumentals! The whole thing's got a great fragile bossa feel, with lots of nice groovy tracks, and a warm lyrical sound. Tracks include "Baiaozinho", "Telephone", "Primavera", "Esse Seu Olhar", "Ainda Mais Lindo", "Vivo Sonhando", and "Amanhecendo". The package is very sharp looking, with the typical angular geometric style of the other Elenco covers!  © 1996-2021, Dusty Groove, Inc.
(Out of print.)

Um Show De Bossa
Elenco (Japan), 1963. Used
CD...$9.99
A live bit of bossa vocals from Lennie Dale – recording here with some cooking accompaniment from the Bossa Tres trio! The format is very spontaneous and relaxed – similar to an American live jazz vocal date of the time, but with a bossa groove instead – one that's a perfectly ... CD

E Lala Lay-e
Deck Disk (Brazil), 2001. Used
CD...$8.99
2001 may well be known as the year of Joao Donato – because he's released so many great albums during the year! This set is more modern than some of Joao's "bossa revival" sets – in a smooth electric-tinged mode, warm and jazzy, with a bunch of new songs, and not just redone ... CD