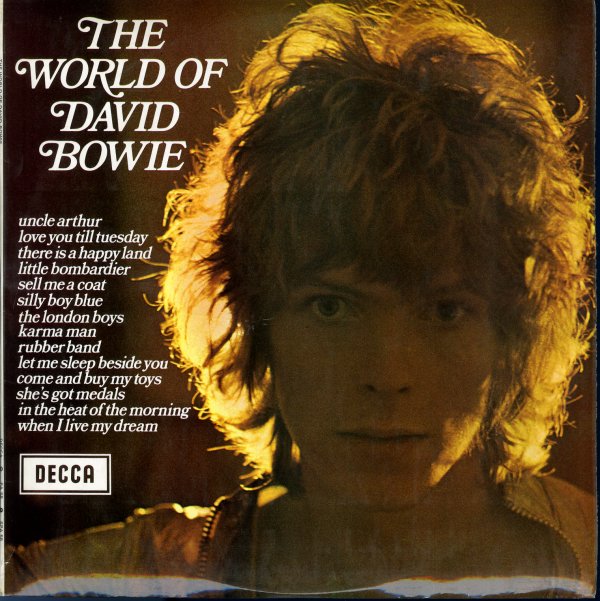 Fantastic early work from David Bowie – material that we've always treasured as much as Ziggy Stardust! This set's pre-Hunky Dory, pre-Space Oddity – and it's an amazing little record that's almost completely devoid of guitars – instead using weird woodwinds (lots of oboe!), soaring strings, and offbeat orchestrations to carry off the tunes – all of which are as weird, mad, and wonderful as anything Bowie wrote in later years! The subject matter of the songs is almost a dark reflection of the picture postcard England that you'd find in work by The Kinks – the local pederast, weird guy who lives with his mum, old military geezer who can't get out of the past, cross-dressing soldiers, a gravedigger about to meet his death, and hip Londoners gallivanting all over town – all delivered with a sharpness that's stunning. We honestly think the record is flawless – incredibly complicated instrumentally, but incredibly groovy too – with all the edge you'll always love in Bowie, but in a fresh young flavor too. Years back, as young Bowie-heads, we always passed this one by – assuming it was unformed early roughness – but it's not, and is an incredible album that would have been more than enough for any other artist to build a career on. Includes "Uncle Arthur", "Sell Me A Coat", "Rubber Band", "Love You Till Tuesday", "There Is A Happy Land", "When I Live My Dream", "The London Boys", "Karma Man", and "She's Got Medals".  © 1996-2020, Dusty Groove, Inc.
(Limited edition – on heavyweight blue vinyl!)

Aladdin Sane (45th anniversary silver vinyl pressing)
Virgin, 1973. New Copy Gatefold (reissue)
LP...$21.99 (LP...$19.99)
One of our favorite David Bowie albums ever! Aladdin Sane was a real turning point for Bowie – recorded on the heels of the tremendously popular Ziggy Stardust album, but really pushing the boundaries past the more straight-ahead rock and glam of that record. Instead of just sitting on his ... LP, Vinyl record album

Low (180 gram pressing)
RCA, 1977. New Copy (reissue)
LP...$21.99 (CD...$8.99)
The Thin White Duke turns to the east – and gets a whole new sound with help from Brian Eno! The album is an amazing departure from some of David Bowie's previous work – a set that's sparer, more spacious, and which is often instrumental – quite a statement, given Bowie's ... LP, Vinyl record album