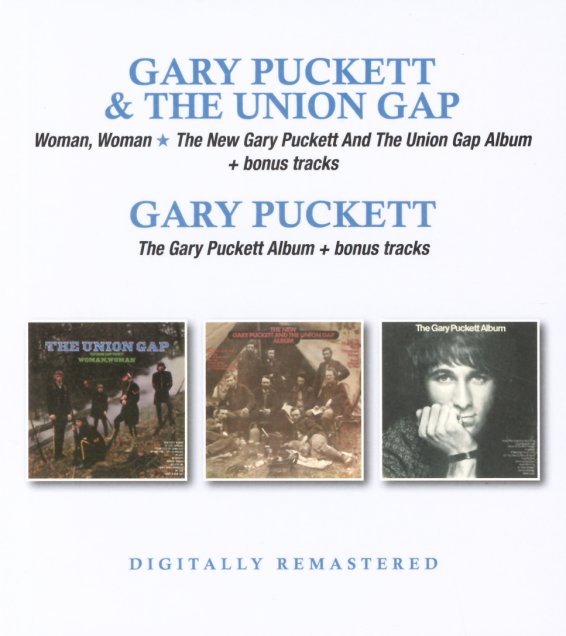 A trio of albums from Gary Puckett and The Union Gap – one of which just features Gary on his own! First up is Woman Woman – a set that takes the tightness that the group had forged in the Cali clubs of the mid 60s, and boosts it with bigger arrangements from Al Capps – who adds just the right blend of larger elements to give things a nice Sunshine Pop kind of vibe! Titles include the big hit "Woman Woman" – plus "M'Lady", "Believe Me", "Kentucky Woman", "Don't Make Promises", "I Want A New Day", "Paindrops", and "My Son". The New Gary Puckett & The Union Gap Album is a record with a Civil War-era photo on the cover – but a sound that's late 60s pop at its finest – arranged and conducted by Ernie Freeman, with a vibe that adds in swirling strings to the core groove of the group – all at a level that also seems to encourage even more vocal flourishes from mainman Gary Puckett! Gary started out as a bar singer, but is clearly reaching higher here – not exactly like, but similar too the way that Scott Walker was seeing himself more as a solo male singer once the 60s moved – especially on the mellower or more sensitive tunes. Titles include "Hard Tomorrow", "This Girl Is A Woman Now", "Stay Out Of My World", "Lullaby", "His Other Woman", "Simple Man", and "Out In The Cold Again". The Gary Puckett Album is great solo work from the leader of The Union Gap – a record that not only has Gary really maturing as a singer, but also emerging as a strong songwriter too! About half the tracks on the album are written by Puckett with other musical partners – and they really show a different set of themes from the earlier group material – with Gary's vocals really rising with a new sort of majesty that adds a lot to the lyrics! Arrangements are by Roger Kellaway, Jimmie Haskell, and Larry Muhoberac – and titles include "Shimmering Eyes", "Gentle Woman", "Do You Really Have A Heart", "Feeling Bad", "Angelica", "Hello Morning", "To Keep The Customer Satisfied", and "I Just Don't Know What To Do With Myself". 2CD package features 8 bonus tracks – including "Could I", "Let's Give Adam & Eve Another Chance", "The Beggar", "Life Has Its Little Ups & Downs", "Bless This Child", "Leavin In The Morning", "I Can't Hold On", and "No One Really Knows".  © 1996-2020, Dusty Groove, Inc.