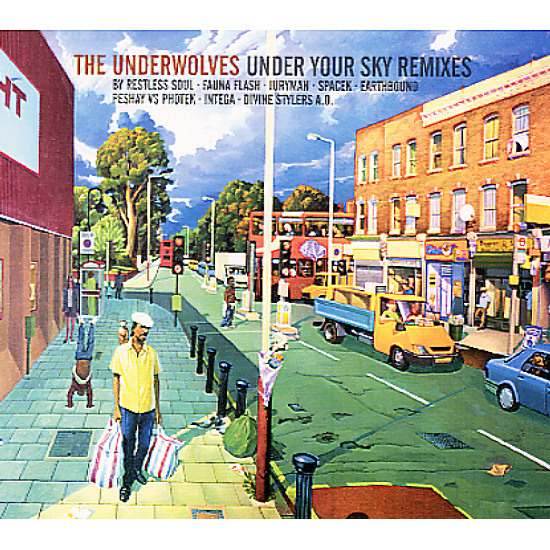 Under Your Sky – Remixes

Great remixes of work by The Underwolves – one of the most soulful acts on Compost Records to date, given some very nice treatment here by a host of modern talents! The CD compiles 12 tracks that were previously only on 12" singles by the group – all remixed versions of titles from their album Under The Sky – tracks in which the group gave the remixers pretty free reign to do whatever they wanted. The sound is great – a much more expanded vision of the original project – with tracks that include "In The Picture (Intega mix)", "Shaken (Fauna Flash Timbales rmx)", "Under Your Sky (origin unknown rmx)", "Bird Song (Earthbound rmx – slow)", "So Blue It's Black (Heavy Manners rmx)", "So Blue It's Black (Peshay vs Photek mix)", "Under Your Sky (Divine Styler without rap rmx)", "Shaken (Fauna Flash drum n bass mix)", and "In The Picture (original)".  © 1996-2021, Dusty Groove, Inc.
(Out of print.)

Fusion (Japanese pressing)
Compost/Sony (Japan), 2001. Used
CD...$4.99
The new full-length album from Fauna Flash – a great little German combo who's been crafting some great singles over the past few years for the Compost label! The record shows the full range of the group's style – mixing together jazzy numbers with other tunes that have more of a ... CD

Koop Islands
Compost/Atlantic, 2006. Used
CD...$6.99
Koop are back after a long time away from the record racks – and apart from makeup on the cover, it's been well worth the wait for the music! The sound here is a great extension of the grooves the pair laid down on their first album – a soaring blend of jazz and dancefloor rhythms that' ... CD

Compost One Hundred
Compost (Germany), 2001. Used 2CD
CD...$4.99
A brilliant celebration of the genius of the Compost record label – an imprint that Gilles Peterson calls "the most consistent and forward thinking record label" in Europe! We feel the same way, and this oversize set is the best way you'll ever find to dip into the label's richly ... CD

Dual
Compost (Germany), 2003. Used
CD...$1.99
A startling debut from Ben Mono – an up-and-comer from Compost Records who will bear watching in years to come! The album's kind of a mix of broken beats and flanged out soul – almost a trip to London, then Norway, and back to Germany – with everything getting jostled up nicely ... CD