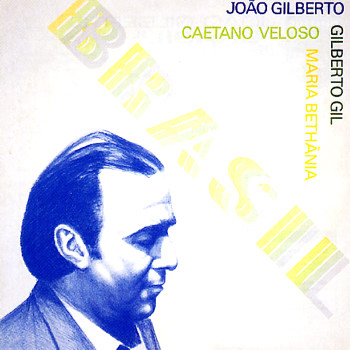 The best of Brazil, old and new – as Joao Gilberto meets up with a younger generation of Brazilian vocalists – Caetano Veloso, Gilberto Gil, and Maria Bethania – all for a wonderful session of stripped-down bossa! The work is very much in Joao's best style of the early 70s – a back to basics return, handled with even more intimacy than before – with production by Gilberto, and some beautifully understated arrangements from Johnny Mandel! Tracks are all nice and long, and allow for lots of vocal interplay between the four singers on the set. Titles include "Cordeiro De Nana", "Aquarela Do Brasil", "Milagre", and "Bahia Com H".  © 1996-2022, Dusty Groove, Inc.
(Cover has light wear and aging.)

Every Day Every Night
Warner, 1978. Near Mint- Gatefold
LP...$7.99
A beautifully soulful record from Flora Purim – still awash with touches from her Brazilian roots, but also done with a great 70s LA sound! Airto's helping Flora out on production, but the real hero here is Michel Colombier – who handles most of the arrangements and wrote a good deal ... LP, Vinyl record album

I'm Fine, How Are You?
Warner, 1977. Near Mint-
LP...$9.99
A lot smoother than most of Airto's other work – and almost more of a soul record than a jazz one – but also a great batch of grooves with a really spirited feel! Airto's percussion is still relatively up front in the mix, and smooth funky LA arrangements take the album to a warm ... LP, Vinyl record album

Almanaque
Ariola (Brazil), 1982. Very Good+
LP...$19.99
The kind of record that kept Chico Buarque going strong well into his later years – a beautifully-penned, beautifully-sung album filled with subtle graces and charms! The style here is vaguely samba-oriented, but as with most of Chico's other work, it's delivered in a mode that defies simple ... LP, Vinyl record album

III Festival Internacional Da Cancao Popular Rio Vol 2
Philips (Brazil), 1968. Very Good-
LP...$29.99
A groundbreaking moment in Brazilian pop culture! The 3rd International Festival of Song in Rio was fraught with controversy – Brazilian music was at a crossroads, and the new experiments of some of the younger groups didn't really sit well with the more conservative audiences in the country ... LP, Vinyl record album

V Festival Internacional Da Cancao – Parte Internacional
Polydor (Brazil), 1970. Fair
LP...$4.99
Tracks recorded at the 5th International Song Festival in Rio – featuring, in this case, the "international part", which includes songs from a variety of global sources. The overall style of the music, though, is in the best late 60s Brazil baroque pop mode, and the strongest ... LP, Vinyl record album

Sambas Para Cantar Y Bailar (aka Os Sambas Que Gostamos De Cantar)
Odeon (Argentina), 1961. Fair
LP...$4.99
Proof that the harmony mode of the 60s wasn't just restricted to the bossa recordings in Brazil – because Trio Irakitan do a pretty great job here in a samba-based mode! Arrangements are lively and spacious, but still leave plenty of room for the warm vocals of the trio – singing here ... LP, Vinyl record album