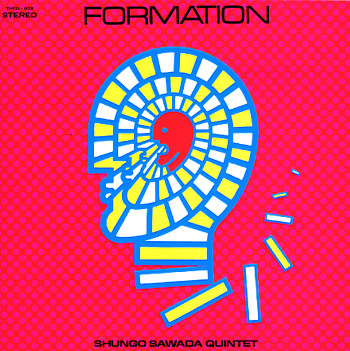 Searingly soulful work from the group of guitarist Shungo Sawada – a player we mostly know from his groovy instrumental sides of the 60s, but who sounds plenty darn hip in this setting! The record has a nice sort of soul jazz groove on most numbers – one that takes Shungo's warmer hollow-body guitar sound and wraps it around some sharper lines on alto sax and piano – plus a bit of flute on some numbers – all in ways that extrapolate nicely from mid 60s Blue Note and Prestige modes, and take off in unusual timings and rhythms. Titles and players are all in Japanese, but the music here speaks volumes on its own!  © 1996-2021, Dusty Groove, Inc.
(SHM-CD pressing!)

Beautiful Bamboo Flute
Victor/Mr Bongo (UK), 1971. New Copy
CD...$10.99 11.98 (CD...$39.99)
One of the coolest albums ever cut by Japanese wood flute player Hozan Yamamoto – a set that has him working with very groovy backings from the Sharps & Flats ensemble – who almost give the whole thing an MPS label blending of funky jazz and world music sounds! The approach is ... CD

Beautiful Bamboo Flute
Victor/Mr Bongo (UK), 1971. New Copy
CD...$10.99 11.98 (CD...$39.99)
One of the coolest albums ever cut by Japanese wood flute player Hozan Yamamoto – a set that has him working with very groovy backings from the Sharps & Flats ensemble – who almost give the whole thing an MPS label blending of funky jazz and world music sounds! The approach is ... CD

Sadao 2019 – Live At Blue Note Tokyo
Victor (Japan), 2020. New Copy
CD...$23.99
We've loved saxophonist Sadao Watanabe for many years, through many different styles, and he's still sounding wonderful after all his decades in music – playing live in a laidback quartet setting, in a performance that's very heavy on his own compositions too! The backing is top-shelf, but ... CD