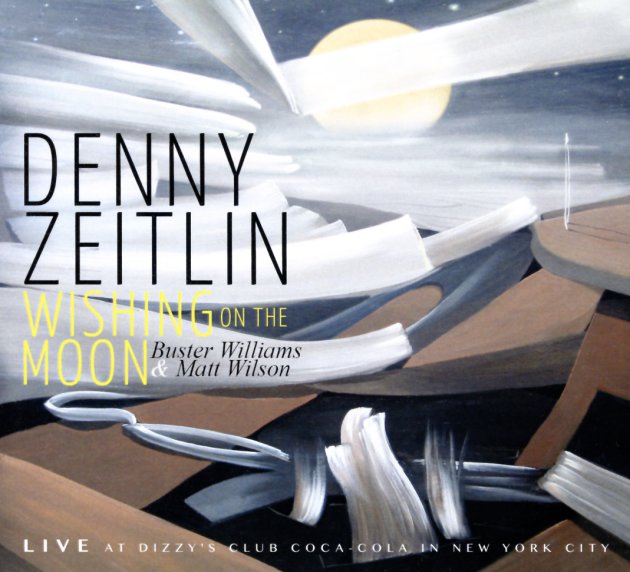 Wishing On The Moon

Pianist Denny Zeitlin never fails to make us smile – and on an album like this, recorded many years after he first brought a new brightness to the world of jazz piano, we're still amazed at how he can unlock so many special moments with effortless ease! Zeitlin's always completely himself, but also never overstating his identity – just casually sliding into these note structures that are as appealing and optimistic as they are fresh – modernism, but from the brighter side of the sun – aided by the work of Buster Williams on bass and Matt Wilson on drums. Titles include the originals "There & Back", "Signs & Wonders", "Wishing On The Moon", and "Slickrock" – plus "All Of You" and "Put Your Little Foot Right Out".  © 1996-2023, Dusty Groove, Inc.
(Penmark through barcode.)

Denny Zeitlin Trio In Concert
Sunnyside, 2009. Used
CD...$6.99
Contemporary magic from Denny Zeitlin – a recent album by the pianist we first grew to love for his work in the 60s! Zeitlin's music here every bit as thoughtful as in years past – complex lines on the piano, but always with a sense of swing – and a good dose of lyrical energy ... CD

Obstacles
Sunnyside, 2021. Used
CD...$6.99 9.99
Trumpeter Pete Rodriguez is the son of the legendary salsa singer Pete "El Conde" Rodriguez – but the vibe here is straight jazz, and with a nice current of darkness too! The bold tones from Pete's horn are echoed by the piano of the album's co-producer, Luis Perdomo – and ... CD