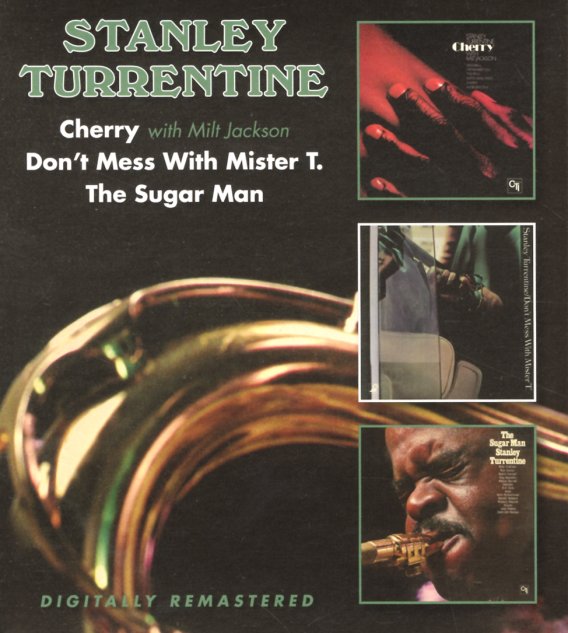 A trio of classic CTI Records albums from tenorist Stanley Turrentine – with bonus tracks too! First up is Cherry – one of the best CTI albums from the early 70s – and one of Stanley Turrentine's funkiest records as well! The album's got a sharper edge than most other Turrentine albums of the time – a quality that goes beyond Stan's already soulful approach to the tenor, and which brings in some tight changes and more pronounced rhythms that really give the best cuts a great groove! The group's a sextet – with Bob James on electric piano, Milt Jackson on vibes, Cornell Dupree on guitar, Ron Carter on bass, and Billy Cobham on drums – and titles include a monster version of Weldon Irvine's "Sister Sanctified" – a great funk tune that's probably best known as the sample for "My Philosophy" by BDP! Other tracks include "Speedball", "Cherry", and "The Revs". On Don't Mess With Mister T, Stanley Turrentine meets Bob James – on a record that's one of the 70s classics on CTI! Bob James handles the arrangements – with that laidback, mellowfunky approach to jazz that he helped pioneer at the time – lots of modal chords in the rhythms, and these wonderfully soulful solos by the great Stan himself! James plays keyboards on the set – and Harold Mabern adds some piano too – and the lineup also includes the mighty Eric Gale on guitar, and Idris Muhammad on drums. Titles include the great title cut – a remake of Marvin Gaye's "Don't Mess With Mister T", plus "Too Blue", "Two For T", and "I Could Never Repay Your Love". Sugar Man is a classic set from Stanley "Sugar Man" Turrentine – a nickname the reedman had at the time, given the success of his famous CTI Records version of "Sugar"! This set follows in that same great mode – jazzy, but a bit funky too – although couched with this gentle sense of soul that's perfect for that spacious style of soloing that Turrentine perfected over the years – a way of blowing openly, and without too much fuss – but managing to hit all the right notes along the way! There's a great glow to the whole record – an excellent easygoing sense of soul – and titles include an incredible reading of "Vera Cruz", done with Deodato on piano, and at a breakaway speed that's just great, and worth the price of the record alone! Other tracks feature piano by Harold Mabern or organ by Butch Cornell – and titles include "The Stretch", "Just As I Am", and "Pieces Of Dreams". Bonus tracks include "The More I See You", "Don't Mess With Mister T (alt)", "Mississippi City", and "Harlem Dawn".  © 1996-2021, Dusty Groove, Inc.