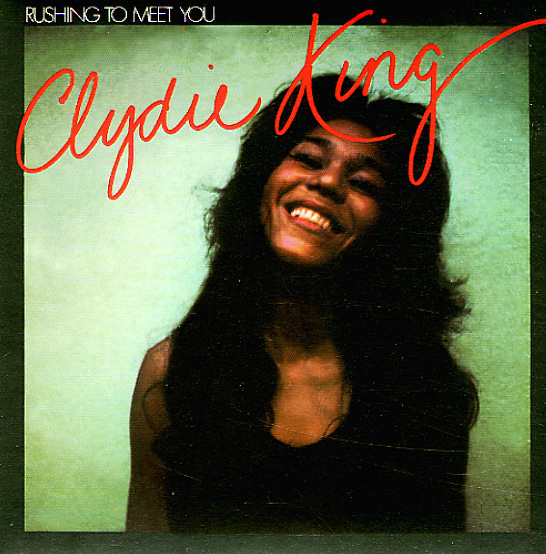 The rare second album from Clydie King – recorded at a time when she was lending her backing vocals to artists like The Rolling Stones, Steely Dan, and Humble Pie – but a set that firmly puts Clydie in the lead! King's got an amazing style of singing – deep and raspy at one moment, with key southern soul roots – yet also totally tight and together, too – with a focus that really shines on the album's more upbeat tracks – groovers that almost have an east coast club vibe at times, quite similar to material that Clydie recorded with the group Brown Sugar! Titles include "Rushing To Meet You", "Loving You Is So Easy", "Steal Your Love Away", "Punish Me", "Our Love Is Special", and "Morning Sun".  © 1996-2023, Dusty Groove, Inc.

First Love
Fun City/Everland (Austria), 1981. New Copy
CD...$6.99 16.99
The only album we've ever seen from soul singer OT Sykes – and a set that's maybe got a greater depth than you'd guess from his image on the cover! The music is a mix of mellow numbers and 80s boogie grooves – but the presentation here is rich, but without having the too-polished mode ... CD

New Look
Checker/Monkey Dog (Austria), 1965. New Copy
CD...$5.99 16.99
With that whip in her hand, we're not gonna argue with Fontella Bass about her New Look in the photo – and we can definitely say that the whole classic album definitely lives up to her hip, powerful stance on the cover! Fontella's a singer who started in gospel, later sung jazz, but who ... CD

Mandroid
Jam Power/Everland (Austria), 1983. New Copy
CD...$6.99 16.99
The rare second album from Gift Of Dreams – and that's saying a lot, because their debut was already pretty darn rare! This set follows strongly in the mode of that classic – tight boogie soul with a great 80s vibe – lots of basslines, plenty of keyboards, and beats that crackle ... CD

Disco Fantasy
Oom Dooby Dochas/Sonar Kollektiv (Germany), 1979. New Copy
CD...$5.99 16.99
Sweet clubby sounds from a very obscure source – the mighty Daniel Grau, an artist who was working on the Venezuelan scene at the end of the 70s – and hardly ever got the exposure of American or European disco artists at the time! The album's way more than a fantasy – as Grau is ... CD

Incredible
Everland (Austria), 1987. New Copy
CD...$6.99 16.99
A late solo set from ex-Supreme Scherrie Payne, and nicely different than the 70s work she did after leaving that famous group! The set's got this great bubbling bounce – part 80s soul, part 80s club – and the record's put together by a host of top-shelf talents – from producer ... CD

Don't Cry Little Tree
PMG (Germany), 1970. New Copy
CD...$3.99 16.99
A record with a cover and title that might look a little goofy – but one that more than makes up for that with a really excellent sound overall! Trevor Dandy's quite a compelling singer – one who works in soul, but brings in lots of jazzy touches with the instrumentation – in ... CD

Released
Greedy/Everland (Austria), 1978. New Copy
CD...$6.99 16.99
A rare funk album with a prison pedigree – a set created by inmates at Chicago's Cook County prison in the 70s, following a tradition of cellblock soul that includes groups like The Escorts and Power Of Attorney! These guys get help from Chicago soul legend Cash McCall – who arranged ... CD

Funky Yo Yo
Versatile/Everland (Austria), 1977. New Copy
CD...$6.99 16.99
Some of the rootsiest work ever cut by Don Covay – done for Versatile Records in the late 70s, but a fair bit rougher and more down home than his sides for Mercury or Atlantic in years past! Covay really returns to his roots for the record – and the backings are often spare, subtle, ... CD

Day By Day
Everland (Austria), 1975. New Copy
CD...$6.99 16.99
A really obscure album of groovy soul – one that's got lots of different strands working together at once, in a way that may make these guys a follow-up to the work of Rotary Connection or some of the other hip groups from Chicago at the end of the 60s! The music is definitely soul, and has ... CD

Chilling Out
Alive/Everland (Austria), 1983. New Copy
CD...$6.99 16.99
Sweet 80s funk from Gary – an artist who's got a great way of crafting lean, mean grooves that offer up a compact take on the ensemble funk mode of the 70s! The album's got a relatively homemade cover, but the sound here is super-tight – not mainstream or commercial, but really right ... CD

From The Heart
Everland (Austria), 1981. New Copy
CD...$6.99 16.99
Donny McCullough may never have hit the big time, but you'd hardly know it here – as the young soul singer comes on with the force of an artist on a major label! Donny worked for Motown around the time of this release, and you can definitely hear that experience in the strength of his ... CD