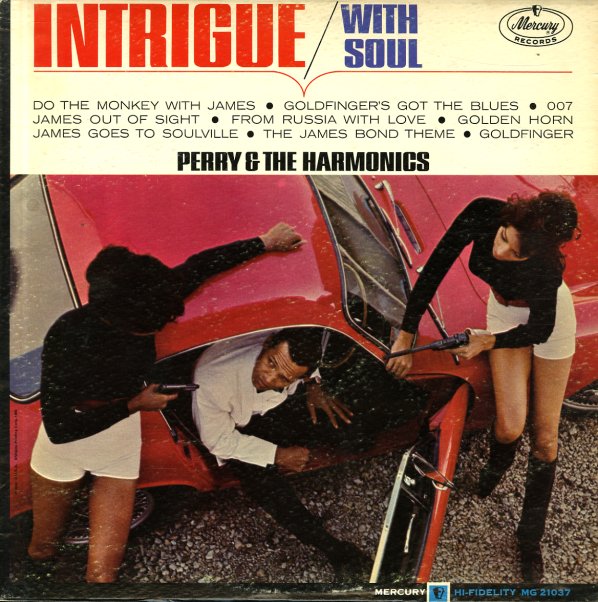 A unique little record – unlike anything else we can think of – one that combines the hippest side of the 60s soul jazz vibe with that decade's popular love of spy culture too! The set's mostly instrumental, but has a few dropped-in vocals that really open things up – and the whole thing was cut in Chicago for Mercury by this group that included Clarence Perry on tenor, Richard McCrea on organ, and legendary soul composer and producer Ed Townsend on piano! Townsend produced the whole session, and he also does some great spooky narration on the track "Do The Monkey With James" – a spy-themed dancefloor track that's totally great! Most of the set's a batch of soul-oriented instrumentals with a spy/James Bond vibe – including a few Bond themes, plus nice originals like "Goldfinger's Got the Blues", "James Goes to Soulville", and "James Out Of Sight". The whole thing's totally groovy, with a great mod soul instrumental feel. It's a very unique record, and we still can't figure out why Mercury released it – but who cares, since the whole thing's great!  © 1996-2022, Dusty Groove, Inc.

First Love
Fun City/Everland (Austria), 1981. New Copy
CD...$6.99 16.99
The only album we've ever seen from soul singer OT Sykes – and a set that's maybe got a greater depth than you'd guess from his image on the cover! The music is a mix of mellow numbers and 80s boogie grooves – but the presentation here is rich, but without having the too-polished mode ... CD

New Look
Checker/Monkey Dog (Austria), 1965. New Copy
CD...$5.99 16.99
With that whip in her hand, we're not gonna argue with Fontella Bass about her New Look in the photo – and we can definitely say that the whole classic album definitely lives up to her hip, powerful stance on the cover! Fontella's a singer who started in gospel, later sung jazz, but who ... CD

Mandroid
Jam Power/Everland (Austria), 1983. New Copy
CD...$6.99 16.99
The rare second album from Gift Of Dreams – and that's saying a lot, because their debut was already pretty darn rare! This set follows strongly in the mode of that classic – tight boogie soul with a great 80s vibe – lots of basslines, plenty of keyboards, and beats that crackle ... CD

Chilling Out
Alive/Everland (Austria), 1983. New Copy
CD...$6.99 16.99
Sweet 80s funk from Gary – an artist who's got a great way of crafting lean, mean grooves that offer up a compact take on the ensemble funk mode of the 70s! The album's got a relatively homemade cover, but the sound here is super-tight – not mainstream or commercial, but really right ... CD

From The Heart
Everland (Austria), 1981. New Copy
CD...$6.99 16.99
Donny McCullough may never have hit the big time, but you'd hardly know it here – as the young soul singer comes on with the force of an artist on a major label! Donny worked for Motown around the time of this release, and you can definitely hear that experience in the strength of his ... CD

Love Gone Bad
HDH/Everland (Austria), 1983. New Copy
CD...$6.99 16.99
Lost work from a really obscure period in the career of Mavis Staples – post-Stax, but before her big revival of later years – and a date that has her working with the Holland Dozier Holland time in a mighty nice mode! The classic Mavis vocals are very firmly in place, but the record's ... CD