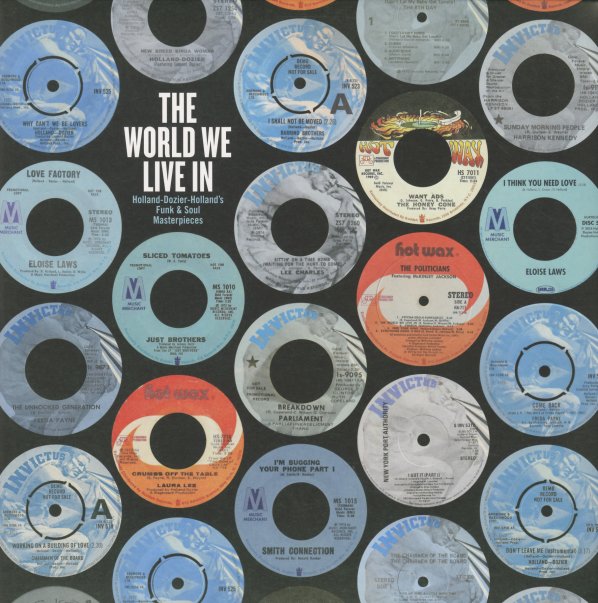 Massive soul from the start of the 70s – some of the heaviest cuts ever put together by the Holland Dozier Holland team – all issued on their own family of labels after the trio split with Motown! The work here is way deeper than their Motown sides – maybe more in the territory of Norman Whitfield, Westbound Records, and some of the other great work coming out in that second wave of soul from Detroit – more progressive and more righteous overall, often with more emphasis on the bottom groove too! As you'd guess from the cover, the tunes all appeared on the HDH labels Invictus, Hot Wax, and Music Merchant – and titles include "Cheeba" by The 8th Day, "New Breed Kinda Woman" by Lamont Dozier, "Love Factory" by Eloise Laws, "Sliced Tomatoes" by The Just Brothers, "Crumbs Off The Table" by Laura Lee, "Working On A Building Of Love" by Chairmen Of The Board, "Unhooked Generation" by Freda Payne, "Sunday Morning People" by Harrison Kennedy, "Don't Leave Me (inst)" by Lamont Dozier, "Breakdown" by Parliament, "I Shall Not Be Moved" by Barrino Brothers, "Sittin On A Time Bomb" by Lee Charles, "The World We Live In" by The Politicians, "I'm Bugging Your Phone (part 1)" by Smith Connection, "I Got It (part 1)" by New York Port Authority, and "Want Ads" by Honey Cone.  © 1996-2021, Dusty Groove, Inc.

Kenny Claiborne & The Armed Gang
Espacial (Spain), 1983. New Copy (reissue)
LP...$25.99
Kenny Claiborne's the singer, but the record's clearly got plenty of help from The Armed Gang – a small group that may well just be the Italian producer Sangy, who brings all sorts of sweet electro soul elements to the mix! The album's got more of an NYC streetsoul vibe than some of the ... LP, Vinyl record album