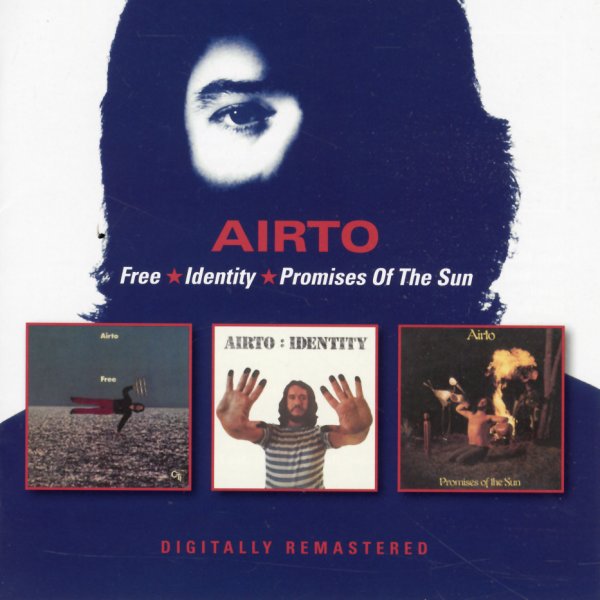 A trio of albums from percussionist Airto – with bonus tracks too! First up is Free – one of the coolest, grooviest albums you'll ever hear from the legendary percussionist Airto – a set that mixes his own Brazilian roots with the electric genius of 70s CTI – all with stunning results! Airto's in the lead – and blows some beautiful wood flute lines alongside percussion – but the album also features killer contributions from Joe Farrell on soprano sax, Hubert Laws on flute, Keith Jarrett on piano, and Chick Corea on Fender Rhodes – as well as a hip bit of vocals from Flora Purim as well! There's some added horns at parts – but the arrangements are relatively spare and subtle – so that most tracks have a core organic quality, very similar to Airto's work on Buddah/Cobblestone, but given a bit more of a CTI twist. Most tunes are quite long and free-flowing – and titles include "Lucky Southern", "Flora's Song", "Creek (Arroio)", and "Return To Forever". Identity is a soaring set of grooves from one of the world's greatest percussionists – a standout set as a leader from Airto, and a key set in his wonderful run of work from the 70s! The album's still got the loose, free feel of Airto's earliest work, and isn't nearly as crossover-oriented as some of the Flora Purim sets from the time – still strongly in a rootsy, earthy sort of vibe – and produced with a very respectful sound by Herbie Hancock. Herbie plays some Arp on the record, and Wayne Shorter brings in some soprano sax too – but the core elements of the album are Airto's range of percussion instruments, keyboards and piano from Egberto Gismonti, drums from Roberto, trombone from Raul DeSouza, and a bit of vocals from Flora. Titles include "Flora On My Mind", "Cafe", "The Magicians", "Tales From Home", "Identity", and "Encounter". Promises Of The Sun is a record that departs nicely from earlier work, yet still keeps all the best elements intact! Airto's percussion work is firmly at the core of the set – giving it a nice acoustic base to work from, while also adding in touches of electric guitar by Toninho Horta, bass by Novelli, and keyboards from Hugo Fattoruso. The groove is a wonderful blend of the acoustic and electric, organic and synthetic – and is often crafted in a majestic vibe that seems to be inspired by the work of Milton Nascimento from the early 70s. Tracks include "Circo Marimbondo", "Zuei", "Candango", "Ruas Do Recife", "Georgiana", and "La De Casa". CD features bonus tracks "Creek (alt version)", "So Tender", and "Jequie".  © 1996-2021, Dusty Groove, Inc.