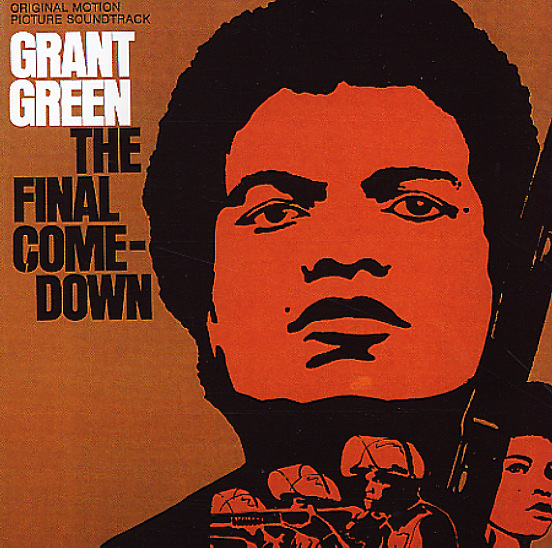 An excellent lost funky soundtrack on Blue Note – their only one for years, and Grant Green's entry into the blacksploitation genre! The whole thing bristles with the kind of chunky, thumping percussive feel as the best funky soundtracks of the era – informed by the work of Curtis Mayfield and Isaac Hayes, but with the deeper jazz feel that Green brings from his other Blue Note sides of the time! Some cuts are quite funky, particularly the opener, "Past, Present, and Future" with it's crisp trap, chicken scratch guitar and bongo driven beat. Others have more of a stripped-down dope instrumental feel – there's some sweet funky flute work on "Fathers Lament", and even a slight bossa groove creeps into the title track! The whole album's very nice, and it's very different than any of Grant Green's other work! Other titles include "Afro Party", Luana's Theme", "Slight Fear And Terror", and "Battle Scene".  © 1996-2021, Dusty Groove, Inc.
(Out of print, includes obi.)

Green Street (with bonus tracks)
Blue Note, 1961. Used
CD...$8.99
One of the earliest albums as a leader from guitar genius Grant Green – and a set that shows off a different side of his talents than some of his other records of the time! The date has Grant working in a trio – with Ben Tucker on bass and Dave Bailey on drums – a super rhythm ... CD

First Session (previously unreleased)
Blue Note, 1961. Used
CD...$14.99
Grant Green's first-ever session as a leader – recorded by Blue Note in 1960, and not issued until decades later! The set features Green's guitar playing in a piano quartet, with rhythm by Wynton Kelly, Paul Chambers, and Philly Joe Jones – about as fine a backing trio as Green could ... CD

Born To Be Blue
Blue Note, 1962. Used
CD...$13.99
A rare one from Grant Green – recorded in 1962, but not issued until 1985. The set's one of Green's early classics recorded with pianist Sonny Clark – a deeply soulful player who really had the right feel for Green's more lyrical soul jazz numbers. The rest of the group includes Ike ... CD