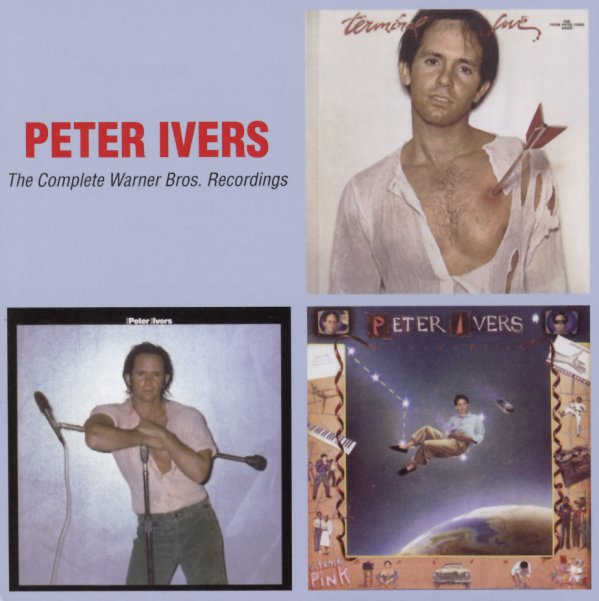 Peter Ivers's entire output for Warner Brothers in the mid 70s – including the original LPs Terminal Love & Peter Ivers, plus the Nirvana Peter compilation, which didn't appear until the mid 80s and STILL sounded ahead of its time – in a complete 2CD set! Peter has a distinctive voice and offbeat lyrical sensibility that feels a lot more akin to the arty fringe of the major labels in the early 80s than it does to 1974 or 1976, he's really a pioneer. It's no surprise at all that he'd end up being the host of LA television's legendary music program New Wave Theatre in the early 80s, but it's surprising he doesn't get more credit these days for influencing the kind thing that'd come to be called "new wave" years after his contributing work! Disc 1 includes the Terminal Love and Peter Ivers LPs, with "Alpha Centauri", "OO Girl", "Modern Times", "Holding The Cobra", "Even Stephen Foster", 'Audience Of One", "I'm Sorry Alice", "Eighteen And Dreaming", "Peter", "Rock And Roll Embarrassment", "Child In A Chair" and more. Disc 2 (the Nirvana Peter comp) features a few tracks from his 2 proper LPs and rarities. The 2CDs have 33 tracks in all.  © 1996-2022, Dusty Groove, Inc.

In A Wild Sanctuary/Gandharva/All Good Men
Warner/Righteous (UK), Early 70s. New Copy 2CD
CD...$16.99 22.99
A trio of classics from this electronic duo – all brought together in a single set! First up is In A Wild Sanctuary – one of the best records ever from Beaver and Krause – largely because there's not so much noodling! This one features the pair on moog and organ, with help from ... CD