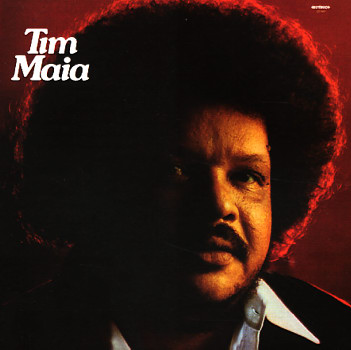 70s soul from Brazil – and a tremendously strong effort from the legendary Tim Maia! This record was Tim's first after an initial run on Polydor – and it shows Maia tightening up his groove even more, but still avoiding the slicker sounds of later years. There's a really focused sound here that's totally great – one that shows that Maia's work was hardly just some happy cross-cultural accident, and instead the careful work of an artist who was out to challenge the best American soul acts of the time! There's a warm little groove to most of the tracks – tripping along lightly in the vein of some of our favorite US mellow soul from the mid 70s – an approach that's mostly soul, but with some funky undercurrents – and often smooth, but never cloying or overly commercial. Titles include "Ride Twist & Roll", "Flores Belas", "Let It All Hang Out", "Sem Voce", "E Necessario", "Leva O Meu Blue", "Pense Menos", and "Musica Para Betinha".  © 1996-2021, Dusty Groove, Inc.

World Psychedelic Classics 4 – Nobody Can Live Forever – The Existential Soul Of Tim Maia
Luaka Bop, 1970s. New Copy 2LP
LP...$26.99 27.98 (CD...$14.99)
Insanely great sounds from the legendary Tim Maia – easily the most soulful singer in 70s Brazil, and an artist with a heck of a strong ear for funk, too! The music here is an incredible hybrid of American soul and Brazilian elements – especially since some lyrics are in English – ... LP, Vinyl record album