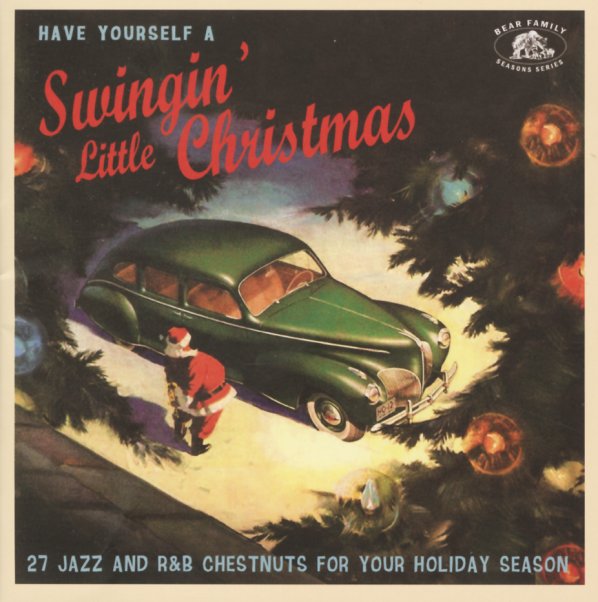 Also available
Various — Have Yourself A Swingin Little Christmas ... LP 22.99

The ghost of Christmas past comes back to haunt us – but in the grooviest way possible, thanks to a fab selection of old school Holiday tunes from the folks at Bear Family! The music here is mostly from the 40s and 50s – and is mostly vocal overall, sung by artists who move through jazz, R&B, and pop vocal styles – often putting an extra sort of punch in a Christmas tune, with the kind of upbeat, optimistic quality that was often the best part of mainstream postwar music! There's few folks we'd trust more than Bear Family for a collection like this – and they do a great job, serving up 27 classic tunes that include "Merry Christmas Baby" by Lionel Hampton, "Here Comes Santa Claus" by The Mills Brothers, "Christmas Island" by The Andrews Sisters, "I Need A Man For Xmas" by Thelma Cooper, "What Will Santa Claus Say" by Louis Prima, "The Christmas Spell" by Peggy Lee, "Dig That Crazy Santa Claus" by Ralph Marterie, "Frosty The Snowman" by Perry Como, "Santa Claus Is Coming To Town" by The Ames Brothers, "Let It Snow" by Les Brown, "The Man With The Bag" by Kay Starr, "Swingin Them Jingle Bells" by Fats Waller, "Christmas Boogie" by Sugar Chile Robinson, and "Santa Claus Is Coming To Town" by Johnny Mercer.  © 1996-2020, Dusty Groove, Inc.

Christmas On The Countryside – 27 Honky Tonkin Christmas Country Songs
Bear Family (Germany), Late 40s/1950s/Early 60s. New Copy
CD...$9.99 11.99
Maybe one of the coolest country Christmas collections we've ever heard – but then again, we'd expect no less from the folks at Bear Family! There's a lot of great original tunes here – which are mixed with country-fied takes on more popular Holiday songs from the midcentury years ... CD

Very Swinging Basie Christmas
Concord, 2015. New Copy
CD...$11.99 12.98
A mighty jazzy Christmas from the Count Basie Orchestra – already great on their own in an instrumental mode – but joined here by a few different singers, including Carmen Bradford, Ledisi, and Johnny Mathis – all of whom add a little extra sparkle to the tunes! Pianist Ellis ... CD