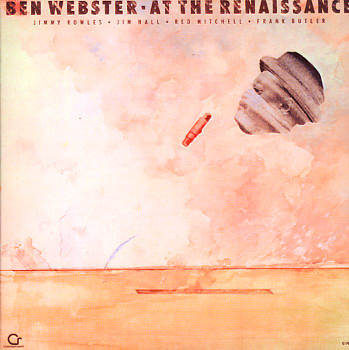 Ben Webster At The Renaissance (with bonus tracks)

A previously unreleased live date from late in the career of Ben Webster – recorded at The Renaissance in Hollywood in 1960, but unissued until nearly 25 years later! The group features Jim Hall on guitar, Jimmy Rowles on piano, Red Mitchell on bass, and Frank Butler on drums – and tracks are all longish, and live-feeling – with that sense of fragility that marked some of Webster's later recordings in this mode, and even further deepened the humanity in his tone. And while the recording quality is definitely "live" at times, Ben's tone comes through loud and clear – different than on some of the tighter Verve recordings of a few years before, but in a way that's really great. Titles include "Georgia On My Mind, "Caravan", "Stardust", and "Ole Miss Blues". CD features 4 more bonus tracks – "Gone With The Wind", "What Is This Thing Called Love", "Mop Mop", and "Renaissance Blues".  © 1996-2022, Dusty Groove, Inc.
(Out of print.)