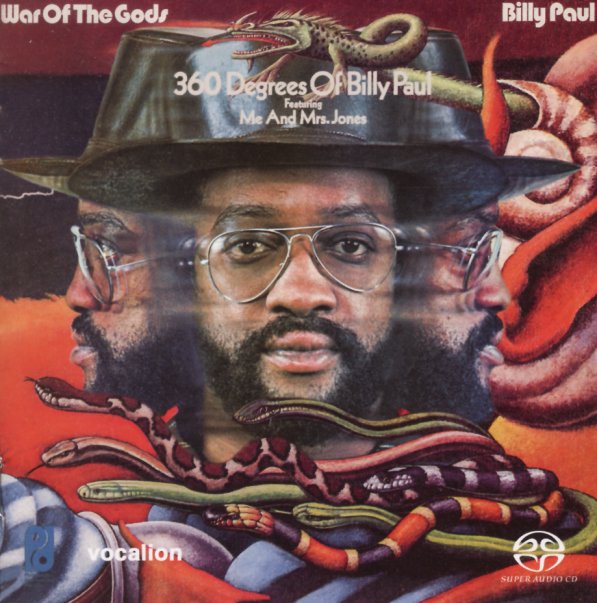 Two ultra-hip albums from Billy Paul – back to back in a single set! First up is 360 Degrees Of Billy Paul – a record that features Billy Paul at the height of his powers – able to capture the ears of the crossover audience, yet still stay very strongly on message – all with this righteous power that maybe makes Billy one of the hippest mainstream soul stars of the 70s! Gamble & Huff are at the helm, and arrangements at Sigma Sound are by Lenny Pakula, Norman Harris, and Bobby Martin – but throughout the whole thing, it's Billy's delivery that really sends the record over the top – the new sense of maturity he brings to the huge hit "Me & Mrs Jones", the funky vibe of "Am I Black Enough For You", and the wealth of great work on tracks that include "I'm Gonna Make It This Time", "I'm Just A Prisoner", "Brown Baby", and "Let's Stay Together". A masterpiece of sophisticated soul that not only had Billy crossing over big, but which opened whole new doors in the market for black male singers! War Of The Gods is a stone treasure from one of the greatest soul singers of the 70s – and a set you'll regularly find in the coolest of record collections from back in the day! Billy Paul was always one of the hippest talents on Philly International – mixing together soul and jazz influences with a deeper sense of spirituality, and long experience as a sophisticated vocalist. This album's one of his most sublime efforts – kind of a quasi-spiritual record with a similar high-concept approach to some of Marvin Gaye's work from the same time – really righteous, in ways that the Philly label didn't always hit – and which really goes past even most of Billy's already hip previous efforts. Gamble and Huff produced and wrote most of the record – including the two long tracks that make up side one, "I See The Light" and "War Of The Gods", the latter of which starts out slow and moody, then breaks out into a club groove. Other titles include the more standard soul tune "The Whole Town's Talking", plus "Thanks For Saving My Life" and "Peace Holy Peace".  © 1996-2021, Dusty Groove, Inc.
(Hybrid Super Audio CD pressing – also works on standard CD players!)