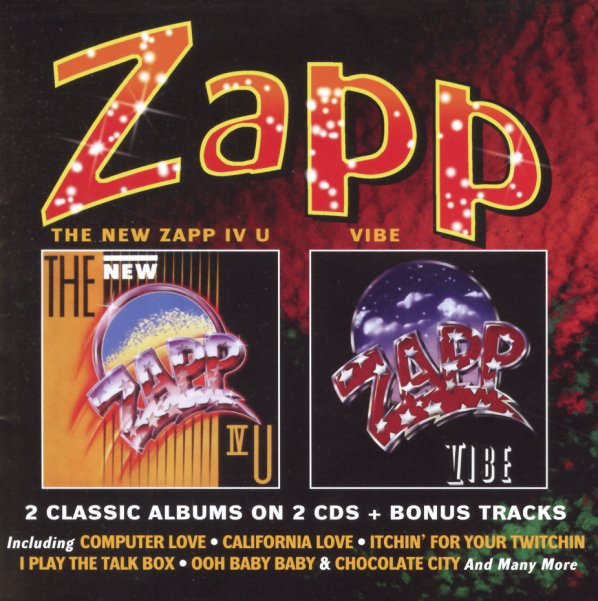 A pair of albums from Zapp – back to back, and with bonus tracks too! New Zapp IV U is the group's fourth album – and it captures Zapp at the height of their powers – a bit more focused than before, but every bit as funky! Roger's production here is impeccable – done with a great ear for the most soulful side of the group's talents, which keeps them far from some of the more commercial groups who were copping their vibe, but never got things right. Great proof of this is the mellow cut "Computer Love" – a slow stepper that has the group showing their sweeter side, but never losing their cool – a bit like some of the best Fatback ballads of the early 80s. Other cuts are mostly funky – filled with tight basslines, keyboards, and electro bits – and tunes include "It Doesn't Really Matter", "Radio People", "Rock N Roll", "Make Me Feel Good", and "Ja Ready To Rock". Vibe is a set that's late in the classic Zapp run from the 80s, but a record that's still very much head and shoulders above the competition – including the many acts who were trying to cop Roger Troutman's groove, but never got things this right! There's still plenty of bass at the bottom, re-fitted to more of a late 80s funk mode – and some of the trickier turns have the group really serving up that link to P-Funk that's always made them so great – and at a level that maybe even George Clinton couldn't even match at the time. Vocoder bits continue that great Zapp vocal legacy too – used in sparing amounts, but still a wonderful touch – and titles include "Ooh Baby Baby", "I Play The Talk Box", "Fire", "Been This Way Before", "Back To Bass-iks", "Ain't The Thing To Do", "Rock Star", "Jesse Jackson", and "Jake E Stanstill". CD features bonus tracks "Computer Love (ext version)", "California Love (feat Dale DeGroat & Big Robb)", "Computer Love (inst)", "Chocolate City", "I Play The Talk Box (ext)", "Ooh Baby Baby (12" version)", "I Play The Talk Box (dub)", and "Fire (inst jazz version)".  © 1996-2022, Dusty Groove, Inc.