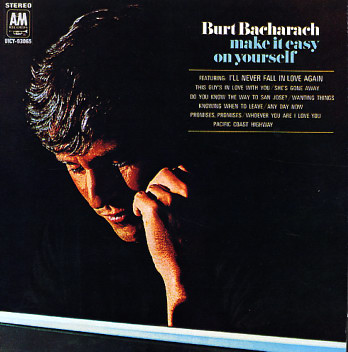 Fantastic work by maestro Burt Bacharach – subtle genius, and an album that offers more to us every time we listen to it! Burt's work has been recorded by many – but few ever gave it the kind of treatment that he did – as you'll hear in this brilliant array of sweeping strings, sly syncopation, and well-placed instrumental solos! The sound is breathtaking throughout – a new level of maturity and majesty for 60s instrumental pop – and the record's an enduring classic that deserves a place in every sensitive record collection. Includes the amazing cut "Pacific Coast Highway", plus great versions of other classics, like "Wanting Things", "She's Gone Away", "Knowing When To Leave", and "This Guy's In Love With You".  © 1996-2022, Dusty Groove, Inc.
(Tan label stereo pressing. Cover has light wear.)

Beach Samba
Verve, 1967. Very Good+ Gatefold
LP...$39.99
A great album from Astrud Gilberto – one that has her pushing past the simple bossa of early years, running through a range of 60s styles that all sound great – really opening up, finding new confidence in her vocals, and bridging a few different musical worlds in the process! There's ... LP, Vinyl record album